14 miles Memorial Day Trail Ride means Twister needs boots. Whoever came up with the name "Easy Boot" is the biggest freaking moron and I want to punch him or her in the nose. It took me AND my neighbor over an hour to get the boots on for the practice run the other day. Once we got them on and I headed back to my house, Twister jogged down the road like a dream. But they take far too long to put on to ride in every day. And that makes me sad. I'd like to ride in them more often. I'd love to try jumping in them! And Twister's feet haven't been the best lately. A bit soft. But that's the sweet grass. Which he is now only turned out on during the night. And back right is still fighting white line. I need to remember to pack a roll of vet wrap and duct tape in my bags tomorrow..... just in case. My trimming jobs, however, have been better than ever. I'll have to get pics this week.


I've been working on building Twister's fitness. Trot sets and long slow gallops. Saturday I worked in my gallop path in the big field. I pushed him up in front of my leg and into my hands and did 5 minute trot sets each way and a 2 minute walk in between with 2 minutes of cantering each way. Then I popped over a couple jumps. Twister was trying to jump well but I was all over him. And instead of being ahead like usual, I was so far behind each jump. I cooled him out and gave up.

Then today M was over for a jump lesson and to keep Sunshine here for in the morning. So I took advantage of this and jumped Twister again. Instead of having a jumping day, I have a fitness or dressage in my jumping saddle day and finish with a couple jumps. It's been working out pretty well. Today was a jumping day.

We started in the "arena" and he was really jumping nicely. He makes me look good. Until you see stills, and then  just look ugly. He was cantering upright to jumps like a boss. None of this dragging me on his forehand shit. None at all. And in the copper snaffle. I still can't get over the fact that I'm jumping him in a snaffle. A year ago I would have died doing that. But anyways. We also did bounces as part of my promise to do more jumping exercises.


My favorite jump was the 2'3" milk crate jump. He over jumped by about 12 feet but did it so smoothly I didn't even know he was launching until I saw the pictures. I've been working on a nice forward canter  and sitting down and asking for him to be upright and forward to the jumps and he was awesome. And the barrel jump I fell off over the other day.... well I swear Twister thinks I am going to fall off every time we go up to it. I have my leg on and I'm pushing him forward and he still slows down and gently pops over at a trot. I keep trying to tell him it's ok and he can canter over it. He's too good to me. 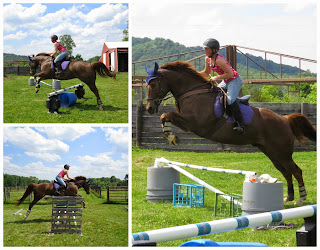 Then we went in the back field and galloped to my xc jump. As soon as Twister figured out what was going on he beast galloped to the jump and jumped like a pro. I need to build that jump up some now that we have the hang of it. And I learned today that we cannot go xc in the copper snaffle. A bevel is a must. Because he is beastly and strong and that was just in my big back field with jumps. Maybe even will have to go xc in my hackamore. I guess I won't REALLY know until I go school though.


After several days of sub-par jumping, I was so proud of Mistertwisterpants and I guess of myself too, to not be falling all over him. I wouldn't trade him for anything!
Posted by Sarah at 6:43 PM