Sadly, not a lot of riding this past week. Rode Monday... remind me never to jump with bit clips again. I thought I was going to die.... So here's a non-riding post that all horse people can related to. Tack Hoarding 101 taught by me!

I have done a lot of selling old tack the past 9 months or so and.... because I am a typical tack-hoarding equestrian, I've been buying new stuff as I sold the old stuff. Our return to showing this year is my excuse. We need to be prepared and look good.... right?? And I'm a sucker for a good deal.

Mom-made fly bonnets. Twister hates bugs in his ears. Even more he hates his own forelock blowing in his ears. Hates. Also, the Micklem is new... well used but new to us. And he is awesome in it. Love.
Browband with 2 strings of bling... yes I have gone to the dark side..... I never do bling. Ever. Maybe if I owned a mare aka when pigs fly. But I couldn't help it. I wanted more than a plain browband for shows. A friend at a show had these and referred me and they are just so pretty and match our pads and bonnets. And they aren't too girly. Manly bling. Is there such a thing? The lady that makes them worked with me on them and was awesome. Very reasonably priced as well. Find her here! Dark Jewel Designs 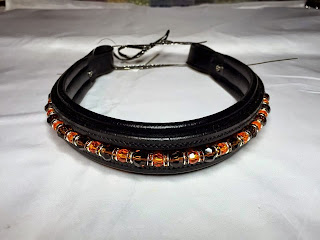 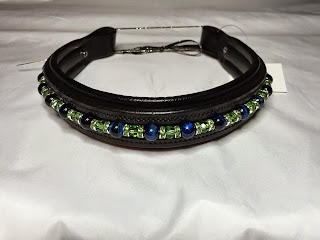 Fly sheet and mask with ears. Because pony with bug bites all over him is a sad pony. This was a necessary purchase as there is no shade other than the little "run-in" off the barn and lot of sun means lots of evil flies. 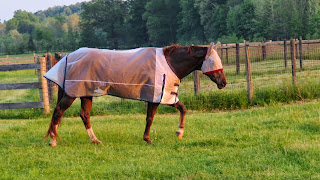 Open fronts. My Woof boots were falling apart :( And M gave me her rope halter because mine was a piece of crap so that I can do my natural horsemanship ground work bonding with Twister without having a halter come unknotted..... Not sure I like the open fronts. And I think his ankles are too big for them. So I might be selling them on and just getting new, non-falling apart Woof boots.

Micklem again! Seriously, I'd sell all my tack to keep this bridle. Also the breast collar is new (to us) and sold my hunter-y one that restricted his shoulders. At the bottom you can see his Tough 1 sport boots which are mostly for trail riding and ponying baby racehorses. They always want to step on him. 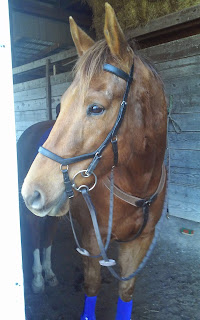 New girth. Because ours was ugly and falling apart. Also notice the orange pad which was his Christmas present.

Dress-ige (pronounced like Dom Schramm says it) saddle, girth and pad. Pad was a bday gift from Mom. I sold the bridle after I bought my Micklem and I got the saddle and girth around Christmas too. It's not the nicest but fits Twister well. Tough 1 boots again. 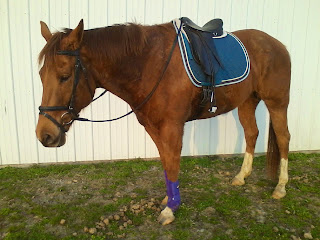 From T, whose dad bought a blanket 10x too big for her gelding or mare and thought it might fit Twister. And it does. Not sure he's very happy about it.... but it's a nice heavy weight and waterproof!

Sleezy!!!! Because braiding for shows the night before and having to fix half the braids after we get off the trailer at the venue is getting OLD and it's only been one show.


Basically, he's a very spoiled only child at the moment who is also maybe getting a little brother. My person and I have been looking for another stock-type horse for him to ride. And I think we finally found one! More on that if it works out and he comes home this coming week.

And I would love to find a western saddle that's doesn't cost more than Twister did when S bought him in the sale barn 8 years ago that fits both Twister and myself. Because I'm giving up on riding in a western saddle. Can I team rode with T in an English saddle????
Posted by Sarah at 4:44 PM