Well, I'm going to talk about both kids' feet.

On Monday, the natural trimmer that gave me advice on Twister and called out his white line disease to look at Rascal and Twister's feet and tell me if I was finally on the right track with Twister. I AM! He says they look tons better and the white line, while I'm still battling it, is almost gone in any of the hooves that had it.


Rascal's feet were kinda ugly, but mostly because they needed to be trimmed so badly. And sadly I didn't get any before photos. But I have afters! I had O trim both boys while he was there because as Carly so eloquently put it, when you trim feet you "sweat like a dirty whore." And if I could get out of it, JUST ONCE, I was going for it. 10 days from now I'll have to do both their feet again anyways. The only way I can keep Twister's feet from splitting apart is to keep them religiously touched up and frequently apply hoof goo.

O does a really nice job and I wish I'd used him for Twister's feet when the shoes first came off. But I don't think I knew he even existed.


And him and his girlfriend got the FitKit out and fit Twister for Gloves. Yes! My horse FINALLY has the natural shape to wear Gloves! I would have never guessed it myself!!!!!


Okay, but back to Rascal. He was a lot better about getting all 4 trimmed that I thought he'd be. I touched up his fronts a couple weeks ago and holy batman it was a fight. It took me like 30 minutes to do his fronts when it only takes me like 20-30 minutes to do all 4 of Twister's. He would not stand still. Kept yanking his leg back off the stand and kept trying to pull me under him in the process. I was pissed off to say the least. He stood still Monday with only a chain over his nose (when I did it I ended up having to lip chain him) but maybe he just needed someone to hold him and didn't like me having the end of the shank in my pocket. Who knows. Babies.... *eye roll*


He has hard little feet that a couple weeks ago were pretty brittle but since the shoes came off are shaping up nicely. I think he'll be one of those gallop across rocks kinda horses. I wish Twister could have his feet. Twister's feet are still sore on rocks and most gravel. Makes me sad.

Yesterday my person and I went to ride the boys and we ended up galloping both of them in the rain. It was so much fun. Rascal never takes a bad step. He has pretty tough little feet! I wish I had pics of us galloping around in the rain but well.... it was raining.... so phone and camera stayed in the barn. 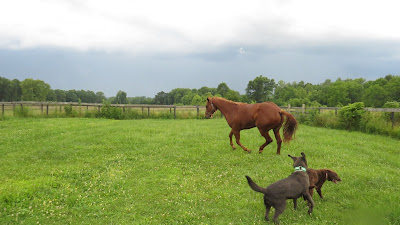