I'm not sure what's going on with Twister and I. Either I'm giving him really mixed signals or whatever is out of whack in his hind end needs to be chiropracted asap.

We did 2 days in a row of dressage schooling. Friday was very abrupt. I was like "oh I'm going to tack up and ride before it storms" HAHAHAHA. I did tack up and get out there and start riding. I could hear the thunder getting closer but I wanted to work Twister a bit first. I could cool out in the barn after! I look around and Roader was MIA. That should have been my first clue. He never leaves me if I'm riding. Then I hear the thunder directly over us and I pretty much cantered into the barn. No sooner did I untack and get Twister in his stall than hurricane-force winds hit us with driving rain. I seriously thought a tornado had touched down. The back barn door that takes 3 people to open and close blew into the barn. I thought some of the other doors were going to come right off the barn. And I picked up my fresh home from the vet puppy and carried his nearly 80 lb bulk into the cat/tack room, Roader close behind (he'd been hiding somewhere....) and shut them in while I went to see where the tornado was. Well there wasn't one. It was just blowing like there WAS one. When I saw it was mostly safe I picked up the puppy again and ran him into the house and shut the boys up in the house while I checked the horses who didn't seem to mind the Day After Tomorrow weather we were having..........


But anyways! Saturday I had a migraine from the time I woke up. But it was cool and there was almost no humidity so not to ride would have been a sin. So I slapped on the dressage tack again. Here is where all the signals gets mixed. 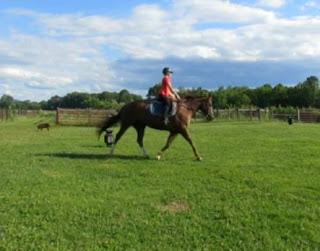 I started out by asking Twister to move forward off my leg on a loose rein. I wanted him to stretch and warm up. As he warmed up I started to ask him to be on the aids and stop hollowing out. If I push him to stay forward he tries to break into a canter. When I half-halt because he's trying to jump into the canter, he wants to stop. When I ask for a walk and squeeze to push him into a nice, swinging walk he starts to jig like a big horse in the paddock at Churchill. If I half-halt and ask him to WALK he wants to die out. I can't get anything consistent to save my life.

He really made me work for it Saturday. And I finally got just a little bit of quality work out of him. Actually, our canter was my favorite part of the whole 45 minute ride. We are ALMOST to where we can stay inside a 20 meter circle.


I don't feel like I'm doing anything different than I have been all along. But maybe I am? Or maybe we are just having a few bad days because Twister thinks every day is Do Whateverthehell Twister Feels Like Day. Or maybe his hind end (probably that right hip) needs to be adjusted. Or maybe I just suck and really need another lesson? Twister has been a bit of an asshat, but I hate to blame him first. I've been trying to end every lesson with a hack down the road. But maybe he just needs a nice long trail ride or a couple of lunging days.


Sunday, I let Twister jump. Sort of his consolation prize for all the dressage work. I used the hackamore. Sometimes I like to give his mouth a break by getting out of it. What I don't like is how he puts his whole freaking face into the bridle and powers on like a charging buffalo.


Other than that though, he was pretty good. I had to get after him to pick his damn head up and lift to the jump instead of hurtle in on his forehead which leads to an awkward jump. And I figured out that I can use my tripod (that I totally forgot I had) to get even better videos in which to take sills from! Wooo!


He still comes into the barrel jump a bit less than smooth. I'm going to lunge him to is a bunch then when M comes back (this week!!!!!!!!!!!!! GAH I've missed my "little sister" she abandoned me for a whole month!!!!) I'll have her put the barrel under everything and just work on all the jumps having the barrel under it until he is smooth to it every time. He never did this until I fell off. Now he's all awkward anywhere the barrel is. Kid! I'm not coming off over that barrel!
Posted by Sarah at 10:26 AM