Ok Blogger pals.... My person has decided it's time to retire Dnieper. He raced on Friday and didn't do well. His heart isn't in it anymore. He is still a stallion and we don't plan on cutting him. That will be something his new owner will have to do as we have put so much money into this kid already. He is 5 years old, 6 in January. He is a tiny Giant's Causeway, just over 15 hands. Probably not well suited for jumping but would make a nice low level dressage horse or a trail horse. He has tons of personality and is not studdish. We are rehoming him to an approved home only for $700. If anyone is interested or knows anyone that might be interested please email me!!! He will be coming home to the farm this week, but is currently still at the track and we could put him on the van to just about anywhere (at the new owner's expense). We both really like this little guy but we don't have any need for him, having 2 big fat ponies already we never ride plus Da Money Man who might be coming home for a lay up. 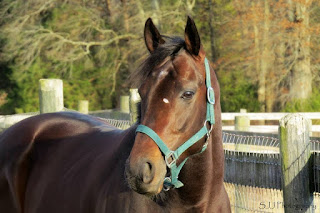 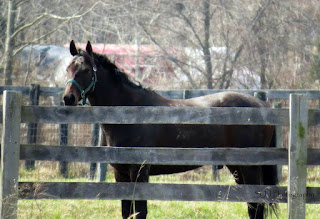 These pics are from February and I will be taking better ones when he comes home and then posting him to Craigslist and Facebook as well.
Posted by Sarah at 9:52 AM