So my person is worried that even in March, after 18 months off, that Curtis still won't make it at the track. I keep saying HE'S MINE if he doesn't race. Even 2-3ft jumps are not as taxing as racing. And if nothing else, I get my dressage horse! He's better suited for it than Twister who only does dressage to make me happy and would rather just jump all the things.

My person says that there is no way me, the gutless wonder (he didn't say that, but it's what I can be on a horse sometimes) can ride Curtis. At the track he is a handful and then some. He bucks and rears and drags riders around. I keep telling my person he's always had a year to let down! If he can't race I spend a month slowly bringing him back into work as a riding horse, teaching him he has a new job. I really don't think he'll be a psycho.....

It's been a long time since I restarted an OTTB, but I'm pretty sure I can do it again. He wants to give him to the neighbor as a pasture pet if he doesn't make it! But we need 3 horses! So why not keep the 3 we have?! He's such a pony right now (pony as in the pony horse, not a -14.2 horse because actual ponies are evil...). I can turn him in and out while pushing the stroller. He doesn't ever spook at anything, like tarps and and scary rolls of wire. I can do anything to him. If it wasn't so mushy outside I'd start lunging him a few days a week because he looks like a broodmare hahaha.

I'm not the gutsiest person on the back of a horse. But I do prefer to ride horses I've known for a while. And I was the first person on his back after all! 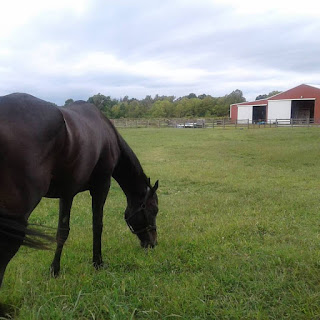