I'm not sure where I left off with the Show Prep of Curtis the Future Dressage Horse. Our canter has been a total hot mess and between it raining and having my "arena" tore up, we haven't worked on it much. I rode him the other day and he was so freaking fancy. I could feel the lift and stretch in his stride. He's getting those high knees which I attribute to his days as a turf horse. 🏇 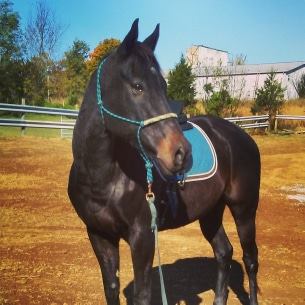 Today T came to the farm to give us a lesson.VERY much needed. My person still doesn't get it, he rolled his eyes and left for work. But whatevs. I needed those eyes on the ground.

Because apparently I have very loud hands. I'm literally not aware that I am even using them until T told me over and over "Quiet your hands! Do less with your hands! STOP MOVING YOUR HANDS" By the end I was in a habit of just barely wiggling my fingers and quietly applying leg to achieve way more than my loud hands ever did. Basically I was just pissing poor Curtis off. The less I did the better he got, becoming softer and more accepting. And I don't blame him. I wouldn't want to reach for hands that were all up in my grill.

I was also told I let him get bored. I need to constantly change direction. Figure 8s etc, lots of transitions. Keep his mind active. She says though he has a body of an adult horse, she can see his brain working like a 2 year old. If I keep circling the same way for 3 or 4 turns he gets bored and loses focus.

We worked on the canter. He picks it right up on both leads now but it's a hot unbalanced mess. Due to the footing we didn't work on it very much but now I have some tips for when I can work on it. Mostly just make sure his trot is balanced first and then hold the outside rein and teeny tiny finger wiggle half halts with the inside hand. Even bring it up just a bit. Keep my leg on when he wants to die out. Going left I thought we were going to lose it but I managed to keep him going and it felt really good. I just wish my footing wasn't so mushy right now. T said that whether or not I have time to work on it, we should stick to our Intro A and B tests for the show because it's his first show and we will both be less stressed out about them. So I'm sticking with that plan.

Then we worked on downward transitions and the halt. Give and take with my hands. Tighten my butt (yes this is what she said) and slow my body but keep my leg on to try and keep him on the aids. By the end he was halting square and being so much softer going down into a walk and also into the halt.

T said that when you look at Curtis he just looks eh. He's a big brown, typical TB. But when I get him moving under me and he starts reaching and lifting he is a beautiful mover and fancy and she can see lots of potential. It makes me so happy to hear. And honestly, I CAN feel it. He's becoming such a nice horse and I'm glad I've really taken it slow and made sure we don't develop bad habits and sloppiness. I tried for 5 years to get Twister to do what has taken me 4 months with Curtis.

My media takers were distracted by my tiny human (who got to show off on Rascal after I was done, impressing them all with how well she does on a lunge line) so there aren't any pics of today. I'm kinda bummed about that. My trailer is supposed to be fixed soon and unless it gets fixed it doesn't look like the weather is going to allow me to have another lesson here before the show on the 17th.