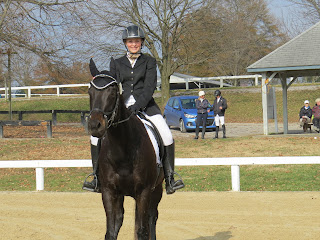 I guess you can say he's officially a dressage horse. Even though when I entered the warm up ring and all through our 1st test (Intro A) he acted like I'd gone down the road to Keeneland, pulled a racehorse out of the stall and said "hey let's go ride dressage". Needless to say it was a hot mess. And the relaxed fancy horse I had at home and even at T's house was not the same horse I had at the show. Partly because he's barely been ridden all week thanks to the weather. And partly because there was a lot going on and he got tense.


But we made it through 2 tests. Stayed in the ring, didn't die or kill anyone, stayed on and stayed on course. We finished dead last in both classes but I was thrilled. I think the first show is the hardest because you don't know how the horse will act. And as bad as it was, it was still better than Twister's 1st test where I had to whip him past the judges booth because he was acting like a giant took even though he's been out and seen things. Curtis only spooked at a giant pile of blowing, rustling leaves, making terrifying horse-eating noises and was super looky at a guy on a bike also making horse-eating noises. 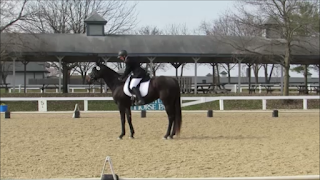 So we got there and the idiot flew backwards off the trailer like a dummy. But he got in his stall and settled right in. Also he and T's mare are now in love. *insert brain-viewing eyeroll here* That must just be a gelding thing. To fall in love with all the maremares. Once we got there I had about an hour until my test. I tacked up and went to the warm up ring, lunge line in hand. I found an empty ring to lunge him in, only after getting on and him nearly deciding to buck me off after 4 seconds and me dismounting and ripping a button of my coat. 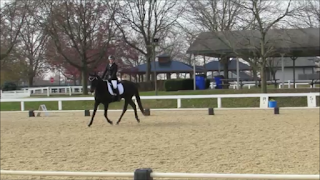 I lunged the pants off him and took him back into the warm up with the other horses where we continued to be tense. I tried so hard to quiet my hands and to breathe. He was a total giraffe and when my number was called I thought "what the fuck, let's wing it". At least I remembered the test. There was a lot of weaving. A lot of unintentional should-ins instead of straightness on the rail because people were going to eat him. And trees. And the pavilion. And the man under the tree who was clearly horse-eating Frankenstein *more eye rolls* He was a mess. D3 (there are 3 Ds. Little, Big D and D3, so you can keep track) said our first test scared her and it looked like he was a racehorse in training, not a dressage horse. I can't say she was wrong.


After the test I walked and trotted him around a bit trying to let him look at things and keep him calm. Then because I still had an hour until our other test, I brought him back to the barn and let him chill out. When I brought him back to the warm up ring an hour later, he was a different horse. He was a bit more stretchy and more relaxed. He wasn't trying to bolt or buck and I thought maybe this test could go better.


It did. Much better.. But it was still bad. I didn't really care. I was thrilled with how we did and that even though Intro B was really bad, it was far better than Intro A and we'd survived our first show. I honestly think part of it was that he liked having the ears on, which we only used the 2nd time around after I was desperate to get him to chill a bit more.


You'll notice my hands are LOUD. And in previous posts I've mentioned that the more I do with my hands the more pissed he gets. And I was legit trying to hard to be quiet with my hands but I have no idea what happened. It's ugly. But I will practice quiet hands all winter until I KNOW the difference between when I think I'm not moving them and I am actually super loud and when I'm actually being quiet.

And now the weather is going to suck for months and I have no decent footing and I'll have to back way off. Just when it's getting good and I think I should ride all winter and have a show ready horse in April. Blehhh. I want a damn indoor.