After SJ and Rascal won the day, I had to deal with Curtis....

Curtis who came off the trailer calm. Stayed tied nicely with  Rascal to the trailer and walked up the hill to the dressage ring only mildly alert. We got up there and he seemed ok. We walked around and looked around. But after 10 mins I got on him he was a completely different animal. He wanted to take off the moment I got on him and when I tried to pull him up he wanted to buck and prop. 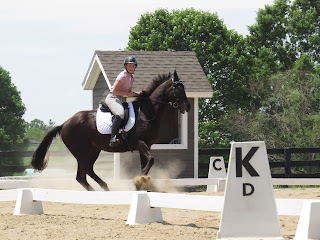 Anyone who knows me or has been reading my blog for a while knows that I'm not gutsy. I've never had to deal with a lot of dangerous shit with horses from the saddle and would rather just not. Since I became a mom, I'm even more timid. I do not want to get hurt. It's not falling. It's the fear of something terrible happening once I hit the ground. 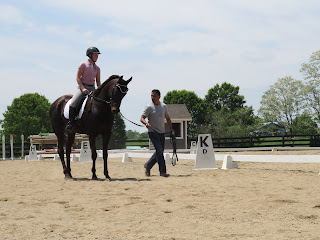 My person is not very understanding. "Ride through it or get off before you break your neck". He's right of course but instead of being pressured and yelled at I need someone saying "it's ok. Just sit up. Ok. Give him a little rein. Make him circle. Breathe." Curtis was bad though. Like a switch had flipped. It was the other horses in the warm up. And the horses out galloping xc. And the person walking past the pond. And the fountain in the pond. And the stack of brightly colored jump standards and poles. It was the whole damn thing. He has no business being there. 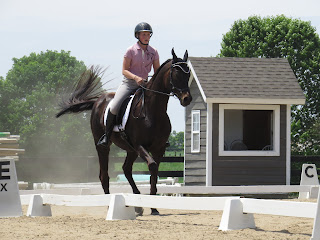 My person ended up on him. He had him doing flying changes and going WTC, quite hotly, but doing it. In short he rode the shit out of that horse. Let him get it out of his system and when he tried to buck he kicked him forward. 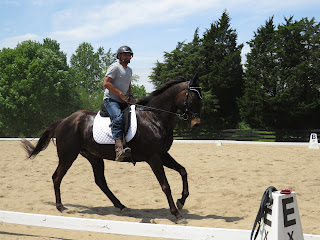 Then I got back on and the damn horse was trying to drop me again. Finally the warm up cleared out a little and I had him in the warm up with only 1 other horse and made him walk and trot and circle and felt sort of okay. There was some hold up in the dressage ring so we ended up down the hill there where it was actually way better. He couldn't see the pond as well or the xc and the horses in the warm up were further away. We rode in there for a minute and luckily T was there and talked me through a bit of warm up just like she did at the show in Nov. Seriously need to start paying the woman a training fee. 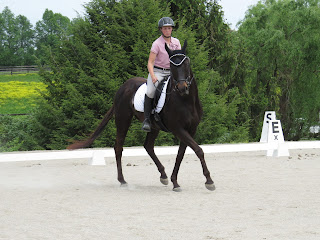 I rode both tests back to back. We scored terribly and it wasn't until the very very end of Intro B that he broke out the relaxed fancy trot. And then spooked at himself in the mirror (for the 5th time) as we came down the center line and our halt was super wonky. I praised him like he just won a gold medal rode out and got the fuck off. I was done. I was crying. I couldn't even.


It was not fun. I don't show because I'm particularly good at it. I'm a mediocre rider at best and have to practice my ass off to manage to do things other riders do with God-given talent. And that's fine. But I enjoy showing. Going out there and trying to beat my personal best. Showing off with my horse. Getting all glitzed up. I enjoy the weeks and months of training leading up to a show because it gives me a goal to work on everyday that reminds me that I was a horsewoman before I even became a mom. That I can be a mom and a rider. But this sucked. My horse was a monster. I was stressed and embarrassed even though everyone was incredibly understanding and nearly every other rider and the ring steward and the judge all said "it's ok! we get it! we've all taken that horse to a show." Thankfully it was a schooling show and they worked with me. That even though I rode the tests way after my ride times, I still rode them. And other riders let me cut in front of them or understandingly kept clear of us in warm up. Almost made up for how they acted about SJ.

I haven't gotten Curtis out as much as I had planned this spring. But I've purposely been riding him during all the shit and construction and next door auctions we've had going on here since October. He never cares about a damn thing. When SJ and my person ride I purposely go to another paddock and ride him alone. We went to Masterson and he was so mellow and I was even schooling in their dressage ring at one point when they rode over the hill and he did not fucking care. But being at a show clearly reminds him of his racing days and makes him way too hot for me to deal with. I didn't even bathe him until an hour before we loaded up to go and had him out the whole night before.


I was, and still am for the most part, very discouraged. I expected him to at least be better than November, which was also a shit show, not worse. My person says I either need to figure it out and grow a set and ride him through the shit or sell him. I'm going to spend the summer and try to work through it. No actual showing until the fall. I'm going to take him somewhere every week, even if it's only to T's house. We can both ride. Leave all her horses out in their paddocks to run. She can leave me and he can learn to do his own thing. We can go back to Masterson. We can trailer to shows with her and alone just to school. Even if schooling is just standing next to the warm up ring with tack on, dismounted, learning to not be an idiot just because horses are going fast. He's also being weaned because I think part of the reason he might have been worse is because he realized his buddy wasn't there. So he's on solo turn out from now on. And then in Sept or Oct I'll take him to another show. If he isn't any better, selling or just trail riding might be an option. He's very athletic. He's fancy. But maybe I'm not cut out to be his partner in crime. Even the idea is killing me. I've been waiting for years to get my hands on this horse as a dressage horse. But it is what it is.

I'm also planning to give a calming supplement leading up bigger outings. If anyone has any suggests please let me know. I know magnesium is good. Horses often get that as an injectible a day before a race. I'm thinking more like a pellet or powered.

I want to prove my person wrong and my self. I don't think either of us are entirely convinced I'm going to succeed with this kid, being the chicken shit I am....
Posted by Sarah at 7:57 PM