Hope for us yet

Yesterday I went with the girls to Blackhorse Stables to a schooling show to try and have a non-explosive ride on Curtis in a show environment. I love Blackhorse. I did a CT there with Twister 4 years ago and it was probably my favorite show I took him to. Everyone is super friendly and helpful and it's a relatively quiet show.

Curtis spent the night at T's with Question so we had at least 2 of 3 in the same place and good thing too because the weather on the way to the show is terrible. Raining so hard we could hardly see. 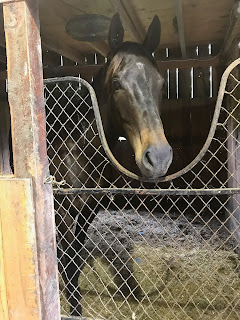 It stopped raining by the time we got there and we had stalls so we could all just relax. After T's awesome rides on Question (his 1st show and getting 2 1sts) I started walking Curtis all over. No tack. Just let him see everything. We visited the dressage and the jumping warm-ups and he went in the indoor(he's never been in an indoor) and got a good look at the jumps in the stadium ring and checked out the food trucks. He was very relaxed the whole time. When D went to warm up for her test I tacked up Curtis and lead him back to the warm up. 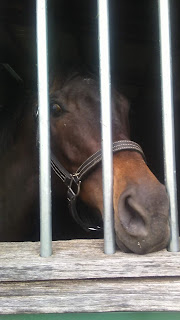 Even tacked up he was still being really good but I was now so nervous I could puke. He was being good and I was under no pressure to ride him or be on time for a show. T had him on a lead when I got on and lead us around for a bit while we determined whether or not he was going to turn into an explosive animal. 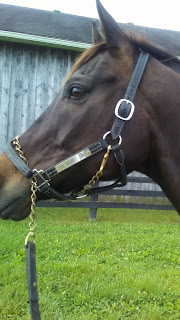 I really didn't care that I looked like a leadliner. If they saw Curtis in May they'd all be thankful he was on a lead and not able to kill anyone. But he stayed mostly focused and after a few I went solo on him and started walk-trot transitions and a big circle around some xc jumps. 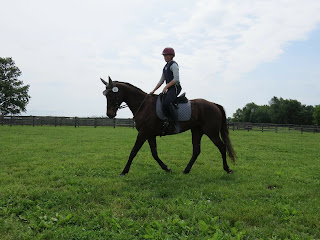 There were 5 or 6 other horses out there warming up but all the riders were very respectful of our space and it was a huge field so plenty if room for all of us. At one point a horse went into his canter somewhat near us and I could feel Curtis briefly tense under me as if he was going to buck or bolt after the horse and I sat deep (a finger hooked in my neckstrap so I didn't pull on his mouth) and gave him an "nuh uh!" And he instantly returned his focus to me. 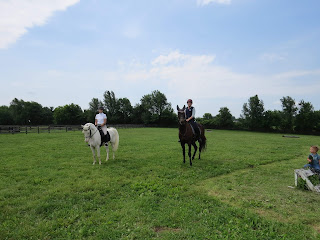 I was all smiles. He was amazing. I was amazing and now I know we got this. It's going to take more time for him to fully learn shows don't = races and for me to get my full confidence back on him but we can do this.

I don't know if it's the magnesium working or the sound reduction bonnet or the fact that I wasn't worried about being on time and riding a test or the glass of wine I had before I tacked up or the quieter venue or the weekly trips off the farm.....so many factors. But whatever it was something worked. And I am thrilled.