I went 1.5 hrs away Sunday with T who was riding her mare and our horse adventure partners in crime, SJ and D, for a lesson with Carrie who T and D rode with last week. As usual I was a bit worried to ride in a new place. I've been there and scoped it out and it's a quiet farm, gorgeous indoor arena and even if Carrie's husband is working with a horse, the arena is big enough for there to be 2 things going on at one time. 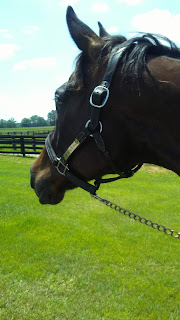 I was going to let T ride 1st but then decided it would be better to go first because Curtis might get pissy if I'm just getting on and Waverly leaves the arena. I got right on after a walk around in hand and T walked next to us but he was pretty relaxed. Looking at things but not being reactive.

So we started our lesson. Carrie has you ride a diamond, not a circle or rectangle. The biggest thing about riding the diamond is about controlling the shoulders and making sure they are even and under him and he is turning from the shoulder and is even in reins and a bridle. It is very hard to ride the diamond but it definitely made knowing what Curtis was doing wrong easier for me to feel and then correct.


So we walked for a minute on the diamond and she asked me to trot and in 30 seconds had me stopped to discuss my loud hands. I had a good feeling this was going to happen. How many times have I said my hands are so LOUD and have been trying for a year to QUIET them???  So what Carrie did was put a dressage whip in my hands, holding it in 2 spots shoulder width apart with my reins. I feel like my reins were too short but I was told to shorten them more. What does the whip do? I can't cross over his neck. I can't seesaw. I can't annoy him. I have no choice but to ride with my seat. Keeping my reins level and steady. So now I'm riding the diamond with a whip under my thumbs. So now I can basically only steer with my seat. I was told to turn from the hips, like riding a bike. Silke said something similar when I was riding Twister. If he brought his head up to resist, I did nothing with my hands but rode him more forward with my legs. Kick kick. Wake him up and make him march. 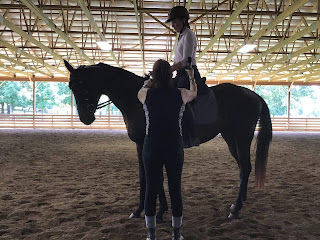 We started at the walk and then eventually did the trot both ways. The longer we did it the more relaxed he became. BECAUSE I WASN'T FUCKING WITH HIS MOUTH. I was riding from my seat. He was licking and chewing and lifted his back and tracked over and became round JUST FROM MY SEAT. He was LISTENING to me. Actually paying attention with out the adhd moments. His ears kept flickering back and forth and our transitions were better. And I forgot to be anxious, nervous or afraid. Actually, I couldn't stop smiling. I kept saying "he feels amazing! he feels so floaty!" Curtis is a smooth horse and enjoyable to ride but this was above and beyond. I couldn't believe how awesome he felt. 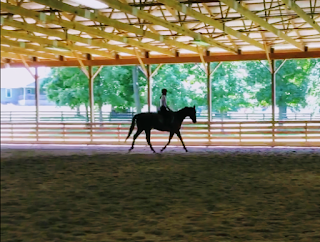 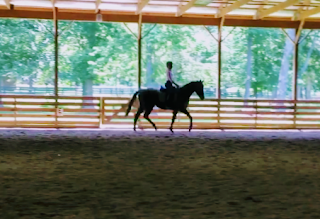 And then Carrie asked if I did much cantering on him. I admitted I do at home and T's but hadn't anywhere else in a very long while because I'm so afraid of an explosion. She said to trust her. That she could see how relaxed and happy this horse is and that under her supervision we should canter even just a few strides so that I got the confidence for it. AND WE DID IT. A few strides to the right and a whole diamond...yes, cantering on the diamond with the damn whip still under my thumbs because she said I was absolutely not dropping it for this because it would make it so much better. And she was right. His left canter was the best canter I've ever ever had on him. What an absolute confidence booster. I don't think I've ever been that confident and relaxed on him anywhere but home.

Carrie is super positive. She doesn't yell or insult. If you make a mistake or the horse stops doing as asked she says "it's ok" and to just try again. She says he is more likely to blow up with he's ridden hollow and with me in his mouth all tense. I really needed a lesson like this. I wish I could afford the time and money to go back weekly. I will probably try to go monthly though. Next time I hope to go right before the show. Meanwhile, I am going to ride the diamond and practice with the dressage whip to teach my hands to be quiet. It's going to be even harder in my arena because it tilts but I am going to make the most of it!!! It can only get better! 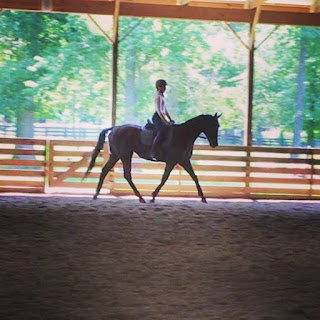