Mom is finally here so I have a babysitter so I can ride some. Finally put Twister to work today. He's fat, hollow and on the forehand but he was really trying to remember all our dressage skills. Basically all I wanted was for him to move out off my leg and for us to both start to use our cores.

It wasn't a terrible ride. Considering we haven't worked since like September (only trail riding) I guess it was an awesome ride. Twister was thrilled to be working. No sarcasm. He was so happy for attention and riding. He wanted to canter but it's too wet out. I'm going to ride again Thursday, Friday and Sunday....hopefully. We will be walk-trotting forever.

Not just because we're both incredibly out of shape (after only 20 minutes in the saddle we were both huffing and puffing) but also because his feet are a mess. Dry and cracked. So I'll be babying them and this week I'll trim them.

Debating what crap to put on his feet.... Farrier barrier, Karatex or Hoofheal? I have Karatex and Farrier Barrier. I just have to pick one and stick with it for the next month or two.

Also, I bought a bitchin' purple sparkle whip in October and have been saving it all this time until I started really riding again. I love it. Didn't really need it to encourage Twister, but we did beat off some flies with it! 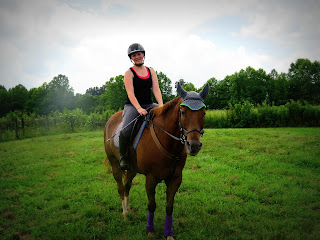