Gettin' His Feet Did

This post is a little late.... 2 weeks ago E trimmed Twister for me. I would love to continue trimming him myself. But let's face it.... I can't even bend over to tie my shoes anymore. She said she'd be more than willing to trim him until I can start again....sometime this summer probably.

I let her get pretty aggressive because his feet were a freaking mess and soooo long. I'm not riding much and when I do I use the Easy Boots. Also the ground is soft. He hasn't even seemed sore from the trim, which makes me feel better about getting aggressive.


The plan is for her to come back once a month and keep up with them. Also, we need to squeeze Rascal in there somewhere. His feet wear really well and don't grow at the light speeds that Twister's do so I've gotten away without trimming him for a long time. But it probably wouldn't hurt to give him the once over.

Also, I went to the feed store last week and bought some Essential K. Twister is going back on it. I really don't think Rascal needs it, so I probably won't give it to him. Rascal can canter across my stone driveway without flinching. He has hard little appy feet.

What a year. Only rode about half of it which makes me sad. But growing a tiny human sucks the life out of you like nothing else ever will. So totally worth it... but still!

The year started pretty good. Galloping in the snow and as soon as spring came we got ready for an early April show which Twister did great at for his first time showing in over a year. 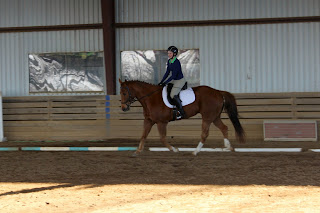 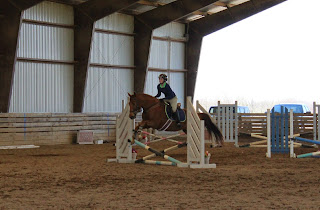 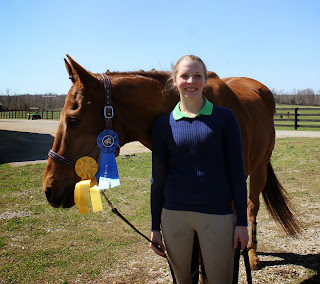 We went to a clinic in May and worked on Twister not being a hardmouthed hardheaded brat. I took home a lot of homework but such is life when your horse is "thick".

After that first show we worked a lot of flat work and building stamina and muscle. The plan was to hit a HT in the fall. But first in June we did another CT and did great. It was such a super confidence booster and Twister was so relaxed and happy to go out there and show off....well in the stadium anyways.... our dressage test was a spooky mess.... I was pretty happy with the CT but knew we had so much more to work on. 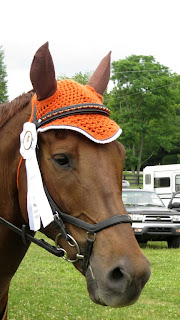 We watched a clinic in July and rode in one in August after I already knew I was pregnant. From June to August our dressage work was better than it's ever been. It was much more fun to say "hey today is dressage day".

Our jumping got bad though. Not sure why. Ideally, as your flatwork improves so does your jumping.... but no. We couldn't get coordinated. The more trouble we had the less confidence either of us had. Before our June show I was feeling awesome about our work over fences. I'd even set up a couple of 3' jumps and felt pretty confident about them. At the show we jumped 2'3" like it was no big deal. End of June to August (before I stopped jumping before I knew about tiny human) we could barely do 1' smoothly. We fell apart. Our dressage looked great though!....


I started working with Rascal some. So was my person. He's a smart kid, if not a little hardheaded himself..... But I think that's just an appy trait. 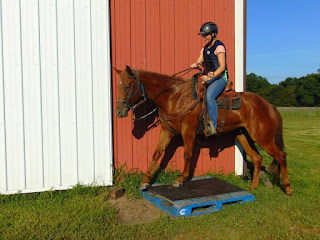 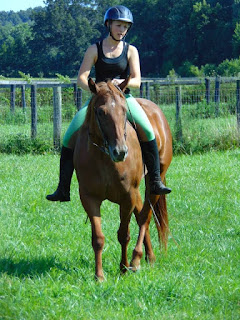 After I found out about the little one I kept riding until the energy started getting sucked out of me like no body's business. At the beginning of September we went on a 3 or 4 hour trail ride. Twister was fantastic. Rascal was really awesome too for his first ever group ride/long ride. 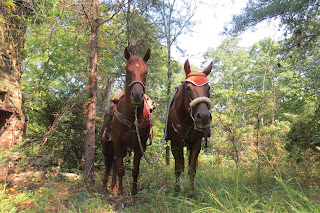 Now I only ride once ever 2 or 3 weeks. Twister is pretty well behaved, but all we do is hack down the road or mosey around the farm. I haven't put him through his paces and really feel there is no point right now. Why fight with him to remind him of his summer lessons to not ask him to do it again for 2 weeks then start all over. I don't have the energy or strength right now for that.

He's been pretty good for the most part about going down the road. I miss riding English but my ass hardly fits in my 18" seat right now...... So we ride western. I don't think Twister really gives a rats ass as long as he's being shown attention and getting to go somewhere.

Twister's feet have slipped too, as you all know. But we're trying to get back on track. Probably the worst thing I could be doing right now is NOT riding him. He needs the blood flow stimulation to his hooves. And with the weather being so warm here in Kentucky I could be riding, however, it's pretty freaking swampy out there.....

I stopped doing conformation shots a couple months ago. Twister looked so awesome and now he looks pregnant too. I think August (bottom middle) is my favorite shot. He was a beast.

I don't have any riding goal for next year. I'm going to keep riding until I physically cannot get in the saddle anymore and then I will have baby girl and recuperate. I hope to be riding again by July, at least the occasional hack. But once I'm sleep deprived and have a tiny baby demanding my time that may not be realistic lol. Twister will have a super easy year in 2016.
Posted by Sarah at 9:35 AM 2 comments:

I really didn't plan on doing this post this year. I'm not riding much and don't plan on showing at all next summer so I figured I didn't need any horse things.... what a joke! You ALWAYS need more horse things!!! 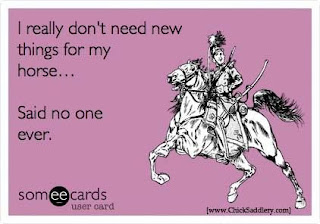 My adorable little psychopants puppy ate one of my flexi spurs. Like chewed it down to half like it was a damn Nylabone. So I'd like a new pair of those. They are perfect for when you need a little push but don't feel like getting bucked off.


On my list is also a new jumping and dressage saddle. Though I know it'll be a while before I can even shop for those... my pregnancy ass barely fits in my western saddle let alone my English saddle right now, as big as the seat is in that saddle. Boo.
I'd also like a pair of sport boots for Rascal. I actually think I'm going to buy a pair this week. Sure, he won't get ridden hardly at all if any until spring. But the more we do with him the more he'll need them.

Rascal also really needs a saddle that fits him (and my person) better. But that's my person's deal. I think we're going to look for one this winter or spring. Rascal is a total beefcake. More beefy through his shoulders and back that even my large monster fatty, Twister. So a giant ass stock saddle is needed. The saddle he is using now used to be Twister's and it is the most uncomfortable piece of crap ever. It gave Twister sore withers and me a sore ass. Hate it. Twister's synthetic western saddle almost fits Rascal but my person thinks it's an ugly saddle and that it makes his horse look bad lol. Whatevs. 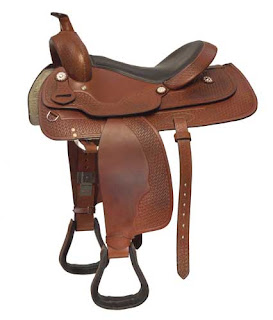 And by pictures I mean WIN PICTURES!! Dnieper, the little Giant's Causeway we claimed back in September pulled out his first win for us. One hell of a stretch run!!! He loved being challenged down the stretch. Like "come at me, bro! you can't take me, bitch!"


And then just because I never shared the photo or video from Curtis, here's his from a couple weeks ago. He ran like shit Saturday. Like didn't run. Came back to the barn like he'd just gone out for a gallop which is basically all he did. He was all nerves in the paddock and the jockey said he was nerves in the gate and during the race too. Owell. We're going to run him back soon. We know he's better than that. 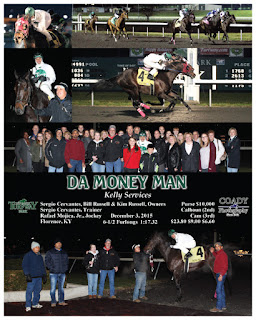 Ok well really Twister was the only one being an asshat. This year he decided he did NOT want to dress up for Christmas photos. He said fuck Christmas. He's not in the Christmas spirit!

So I got after him and sacked him out with the tree skirt and made him walk around with it on his head. And he'd messed up his mane bows so bad I had to take them out. 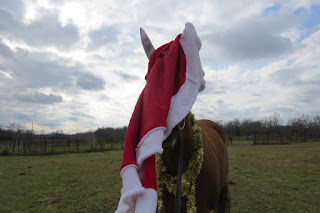 We did the rest of the photos on the ground..... 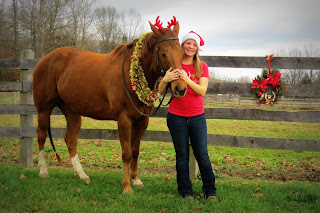 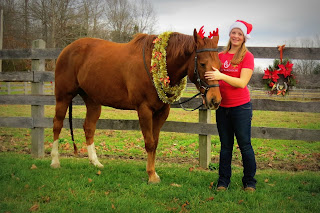 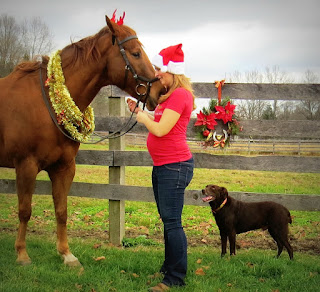 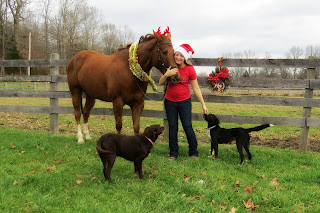 He still wasn't too thrilled but that's just too damn bad.

A few days before we took these I got some with him and baby Rascal. 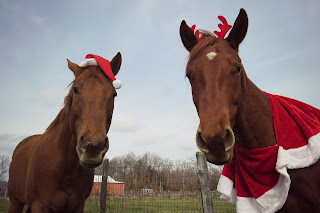 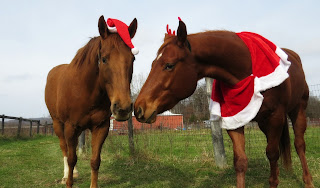 And then after our highly eventful Christmas photos I went riding with E down the road. Twister was really mostly good. I didn't make him go down the road in his Christmas gear because it would have affected his apparently very fragile ego..... 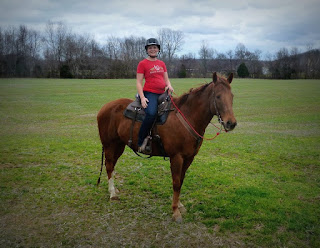 Baby Curtis just won his debut at Turfway this evening!!!! Won by a nose but he was still pulling, not worn out at all! I couldn't be there thanks to this new job but I watched the live feed and was screaming my head off. Kid can run!!!!!!!!! 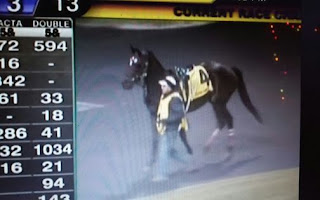 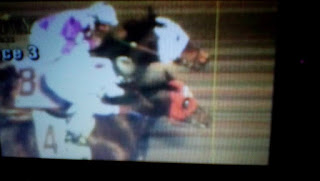 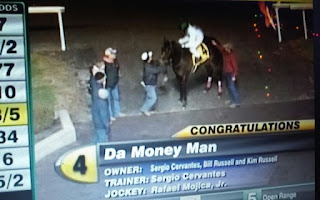 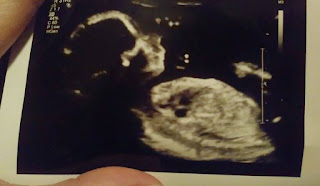