Day off the farm

One of my goals before show season was to get off farm several times. Yesterday we made it off farm for the 1st time. Curtis has been sore in his back end so we had a week off. 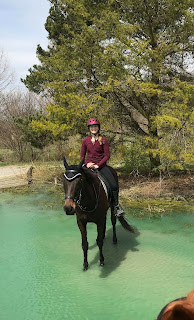 We decided to take a family trip out to Masterson Station in Lexington. It was warm and the sun was out. Everyone trailered well. Everyone stood tied to the trailer well. There was stuff going on, just enough to give them something to look at but not at all crazy like a show. 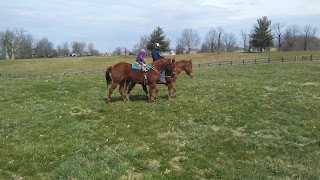 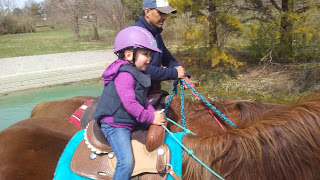 Sj and Rascal did awesome being ponied by my person. We rode for almost 2 hours and she still didn't want to get off when we were back at the trailer. She didn't have any legs when she tried to stand up though lol. 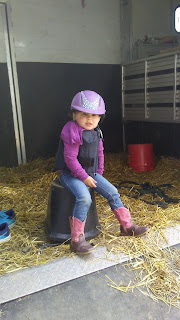 We all had a little problem at the stream and water jump which is ridiculous on all their parts. Especially Twister who acted like an idiot and knows better and has galloped through all that with me last summer. 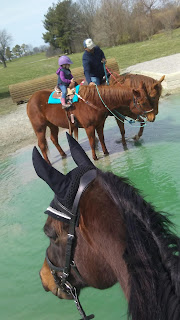 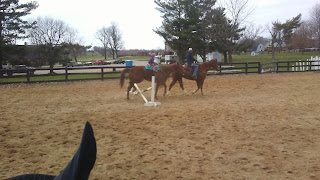 By the 2nd time around though they all had their shit together. We all walked or trotted iver small xc jumps and walked up the little bank and walked or trotted over xrails. And I took curtis in a dressage arena and did some flat work. The sand footing wore him out. He walk-trotted well but didn't want to canter. We did canter up a big hill though. He was so level-headed the whole time and we spent most of the time on a loose rein.


Where was this horse in November? Can I please have this horse again in April??

This week is the 1st dry warm entire week in years (ok well months...) and I did too much the 2nd day and have to give Curtis a few days off now. 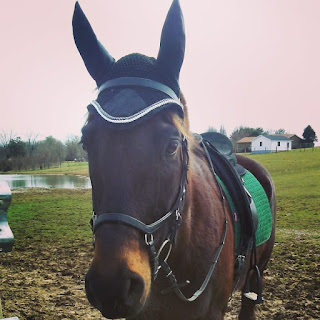 2 days ago I decided getting out of the arena and having a little gallop would be fun. We did walk trot gallop trot walk repeat 4 or 5 x for 30 minsand had a nice long walk to cool out and a splash in the pond. Yesterday his back end was clearly sore. I feel bad. But it's nothing serious and he'll live. I gave him bute yesterday and am buying some higher protein grain to help with his muscle building and soreness as we get back into serious workies again. 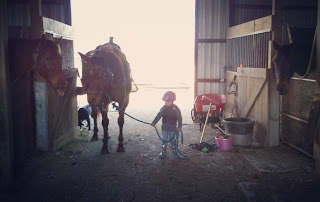 I should work Twister out a bit while Curtis has a few days off. And SJ and I rode double on Rascal yesterday for a long time. She loved it and all the splashing in the pond. 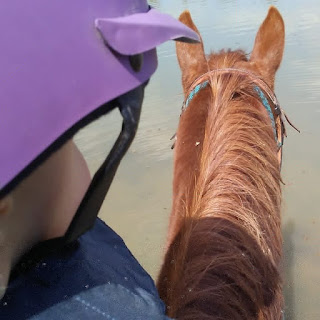 Holy crap is it ever going to stop?! It rains for days one week and the next it snow and is bitter cold. I'm lucky to get 1 day to ride in a week. Last week I got a whole 3 days. A record this winter.

Our property is terrible for rain. When it rains it takes days and days to dry out enough to even walk-trot and I can't ride at the top of the field because I'm trying very hard to let the grass grow when the weather is halfway decent.

Curtis is super ugly right now. He is always super ugly during the winter but I feel like he's extra ugly this year. We picked a knock-the-dust off show, April 20. It's a mini-mini trial and....THERE IS LEADLINE! SJ will do leadline all 3 phases (Intro A and poles on the ground) with her trusty redheaded steed, Rascal and I'm going to probably do ride-a-test for Intro A or B. Just to get out and see if we can behave better than we did in Nov. In about 2 weeks we will have a field trip to a friend's down the road with both ponies for practice and probably a lesson for me. Much needed!


And no one is shedding! I'm so annoyed. So 2 weeks ago I dewormed them and still nada. I blame the lack of grass. They're not used to so little grass even in winter. The work on the property tore up so much of it too late in the year.....