I'd hardly ridden in 2-3 weeks. I hate how that keeps happening. But with it getting dark earlier and earlier, I can't always make it out after SJ's bed time in enough time to ride. Mom is here now though. We've already been tack shopping. I got some things I totally don't need but wanted and Mom was treating. SJ's gotten a ton of stuff too, including some things for Rascal for Christmas. Also, my person and I are looking for a not totally fugly 8-10" western saddle with full quarter horse bars for her for Christmas. If you know of one for sale............ fqhb on a kids saddle is so effin hard to find! 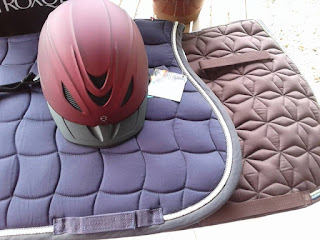 Part of my inability to get a ride in at the moment, is because we haz a new family member..... His name is Teddy and if we're friends on Facebook or Instagram, this is old news. We adopted him almost 2 weeks ago now. He's about 14 weeks now. A chocolate little man. My old chocolate man hasn't been doing well the last couple of days. He needs to go to the vet next week and me being an anthropomorphic hypochondriac, am terrified. 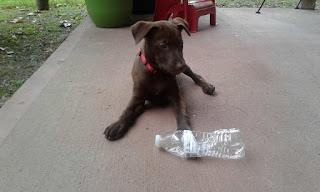 But back to riding things. Twister is like FUCK YEA RIDING and has been awesome. Mostly. He is all in racehorse mode and wants to go fast ALL THE TIME. I get on him and ask him to walk off and he's like TROT?! No. Stop that. You can march a long without running around. Quite possible. You can do it when it's food time. 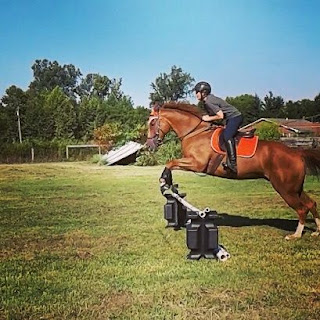 We've popped over some jumps. We've done the trot poles. We've figure-8-ed and circles and done transitions. And for as little riding as I've done, I'm very happy with how Twister has just picked it right back up, out of shape and fat as he is, like we've been riding a few times a week.... not a few times a month lol. I was going to walk to the back paddock and jump him over my little xc jump a few times while I had Mom standing by ready to dial 911.... jk. Partly. But I went to open the far left gate and got stung by a wasp in my hand. At that point I was just done. So maybe tomorrow.........


I got 2 new pads and a helmet that doesn't require all my hair stuffed in it to fit. But I'm not sure about it. Maybe I should have just gotten boring black so I don't look 12 lol

If you follow me on Instagram you've seen these photos. Thanks to it no longer being 857895* during thr day, I can get some riding done in the evenings.

Twister broke my camera so my media is terrible and limited. Like a phone video screenshot lol. Last time it was little Ranger who broke it and it cost over $100 to fix.

The day Twister killed my camera I had a little jump set up which we trotted and cantered  to. He was great. Kept a level head. We got our distances and he didn't over jump. I was so happy. 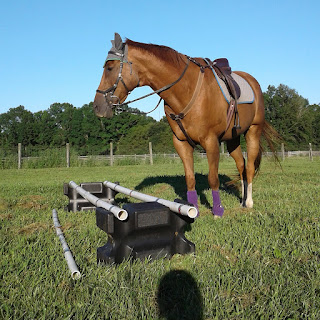 The next day I had trot poles down and going left he could not calm down because that's how we came into the jump. He fought me in the corners and wanted to cut and rushed into the poles. It took most of our ride to get him to go through to the left without being a shit. Going right he glided.

Last night I had the poles set up still and worked on them. He was tough last night but not a total shit. He gets almost push button or he's a green rushing speeding racehorse. Most days it's only those 2 when he isn't worked daily. Last night he was tough but the kind of tough where every little adjustment I'd make changed how he went big time. If I sat up and tucked my tailbone under me and thought hard about my hands and legs he'd stop rushing and start stretching. Yea, this is common sense. But doesn't always work every time to get him to chill out. Sometimes he just wakes up a 3 year old racehorse on his way to the TC. Seriously, when is my fat 13 year old QUARTER HORSE  going to act like one??? After mucho cantering and trying hard to get a quality canter, not a fast one, he trotted out all long and low and amazing. 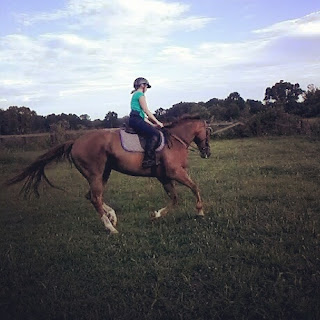 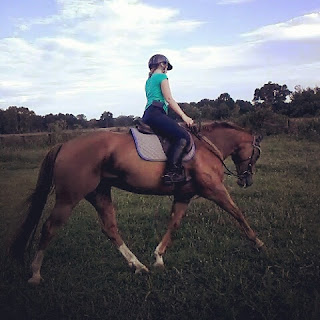 So I've been trying to decide what to do today. My body is so exhausted from our workouts. I'm still struggling with some post partum issues, 15 months later..... But if I don't push I will never get out of this funk. Maybe tonight we can try cantering ground poles? Maybe another jump? Maybe put less of a bit in and do the trot poles and circles and cantering again. We've been going in  the  3 ring because he got so tough and I don't have the core or leg to handle more than 10 mins of him dragging my ass around. I hate to compensate for my weak body like that but it is what it is and it's not like I'm yanking on his mouth.

2 more weeks until mom is here! Then my person and I are going trail riding and I can get mom to take media for me when I ride  hahaha.