So the other day the baby was napping and even though it was windy and cold and I had stalls to do, I went and fetched Twister and rode him around the yard WT some. He was so good. I was completely saddle sore the next couple days though. I guess I need to ride more!!! 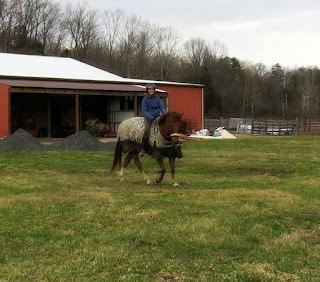 We still don't have the poly in the barn because it's been like Noah's Ark weather around here so the guy that would go get it and deliver it can't because he'd just bogged in our yard...... It rained so much then froze so fast we can't even use the eurosizer because the water never drained/dried and now it's clumpy and hard.


This weather sucks. Is it May yet???

And going on 2 weeks ago now maybe I rode Rascal. We thought someone was coming to look at him then they were no show/no calls. I hate when people do that. If you don't want to see him anymore just freakin tell me! He was really good and super boring. Which is a big reason my person doesn't want to have him as HIS horse anymore... he likes a horse with zest. And seeing as Twister has been commendeered he has to find his own. If Curtis' tendon doesn't get an ok from the vet in August/September Curtis will be his new riding horse. He has zest. Buck you off and and leave you on your ass zest.