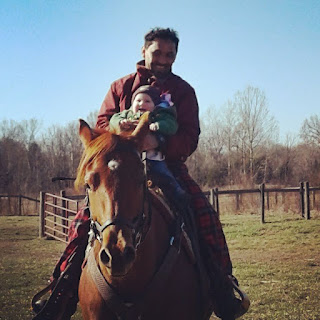 I had a FB friend come try Rascal yesterday so we finally met in real life. She texted today said she's going to pass on him because he is too lazy. Hahahahaha! How many times have you heard that?! I don't want him, he's TOO lazy? 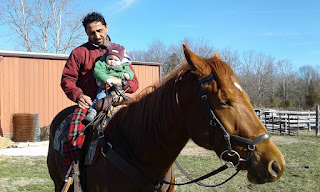 While he was tacked up my person hopped on and took Sianna for her first real pony ride. She's sat on the horses plenty of times, but never gone for a little ride. They even trotted some and she LOVED it. Squealing and laughing the whole time. If you are FB friends or follow me on Instagram this is all old new lol. 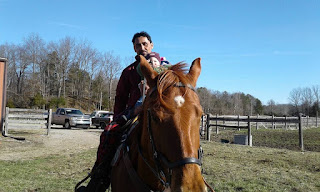 But we decided if she didn't buy Rascal we would just keep him and put the miles on him so Sianna can ride him in a couple years. I still really want her to have a pony. Something more like 11 or 12 hands.... not 16....... But Sergio says she'll be fine, she's a cowgirl, she doesn't need pony she can handle a big lazy horse.


So I want to know, what size was your first horse if you had one as a toddler? I rode a bitchy QH mare of my mom's friends when I was little but they never took her off the leadline, especially after she took off with my mom. Stewart, who I leased for 4 years, was 15 hands but I was also a teenager. As a momma I'd rather her fall off a pony than a big gelding. Either way she'll have a vest and helmet! And plenty of toddlers start off with a full size horse.......right???