This will be a 2 parter because the part about me and Curtis is a long one. So stay tuned.

Yesterday I hauled Curtis, Rascal and SJ to a show. We pulled Rascal off and tacked him up and got SJ geared up. Left Curtis on the trailer alone and after we were out of sight he stopped screaming and worked on his hay net.

We walked up the hill to the dressage ring and he was looking at everything but behaving. He's not a fan of cars coming up from behind him but there was no spooking. Once in the dressage warm up, SJ and Rascal weren't even on the steward's list. So that annoyed me. Because were were on the check in list. Shouldn't they be the same????? So 15 minutes after she was supposed to do her test we start the test and little Rascal and SJ were awesome. That big appy is worth his weight in gold. And that's saying a lot because he looks 9 months pregnant. 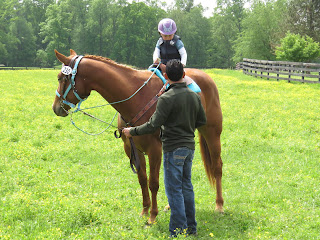 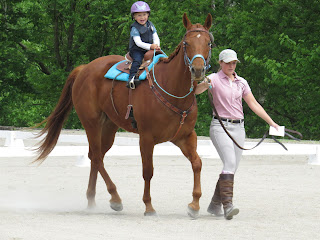 We went down to the stadium ring and again they had no idea what was going on or that there was even a leadliner. Kind of put up a stink saying they had to change the course. Well we paid for this so let us do our 6 "jumps" and you can do your course. After we got through our short course everyone clapped and cheered and she told Rascal "GOOD BOY!!!!!". 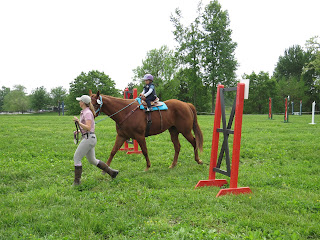 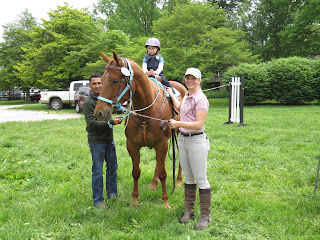 And then the "xc". I get there 20 mins past our ride time. Leadline was supposed to go between divisions and they just went on because we weren't on their list....again. Whatever. They wanted me to wait another 20 minutes for the division to be over but I said no. It's not my fault we were late. We'd been jerked around at the dressage ring because they didn't even know why we were there. And I had another horse to ride so could you please give us 5 minutes to walk over our 6 poles on the ground and call it a day for my leadline pair. They said yes. But then. They sent riders out on the course after we were in the middle of it. Send the 2nd one out even after the 1st horse galloped by us spooking Rascal and nearly throwing SJ. Who luckily thought it was funny and has a great fucking seat for a 3 yr old. We didn't even finish our last "jump".

I was so proud of SJ and of Rascal who mostly kept his shit together. It wasn't his fault! But I had words with the show secretary. I paid for this! Do NOT act like my daughter, doing what she has a fucking right to do as a paid rider in a division you added for kids like her, is an inconvenience. You don't even let more than 1 horse on a course for baby starter. WHY THE HELL would you for leadline?! I was so pissed. I still am. I won't go back there. Not for leadline. I need to find 4H shows because this kid is hooked. Even if it means we don't show the same day. (more on this in part 2).

She was the only leadliner that day to show up and won a huge blue ribbon and she is hooked. She is in her room right now "napping" but really laying in bed sounding like she's reading a dressage test and telling stuffed Rascal "good boy! there ya go! x halt salute!" 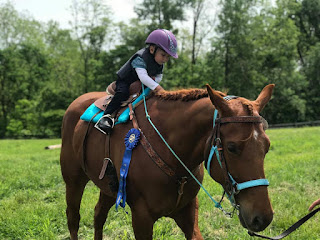 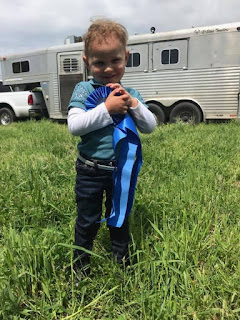 God, please give my kid all the guts on a horse I lack. 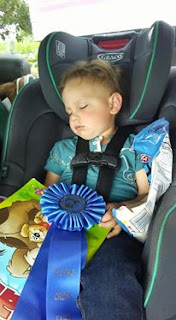