So Monday was jumpies day and when I warmed Curtis up he was giving me so gorgeous trot. His canter over there is not so great compared to home and also his transitions into it are terrible. I don't understand. It was a beautiful day and I think the cooler weather was getting to him because he kept spooking at things he's seen there 100x. Like the pigeons. They'd flap. He'd leap. Repeat 54x because you clearly have never seen them before. Or cows. Or other horses. All foreign. *insert giant brain viewing eyeroll here* 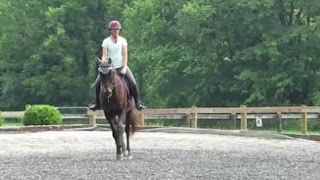 The sound reduction bonnet I bought didn't fit so I sent it back and ordered another which still isn't here but should have been by Monday.

He's also been on magnesium for over a week now. I was doing it to use as a calming supplement but he also ticks almost every box in the magnesium deficiency chart. It's a cheap thing to try too if you can find a store that sells it really cheap in bulk. I probably won't see a change for a few weeks though. It has to get into his system.

So anyways...I'm rambling. The best part of Monday's ride is when I went to canter him over a little verticle. He hit the ground throwing his head and trying to prop. It probably felt worse than it looked but at one moment I was hanging pretty far off the left side if him and thought I was going to hit the ground. BUT I STUCK IT. Of course I made him do the jump again and behave and I was just so thrilled I stuck the friskiness out because I am not a sticky rider. When we cooled our he went in the creek like a big boy, no hesitation. 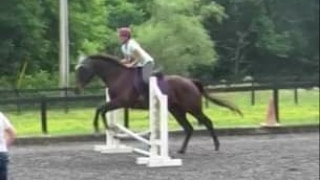 Then Wednesday during our canter he had the wrong lead and when I put my leg on to ask him to switch he threw his legs over his head and tried to take off out of the arena. Fun stuff. Needless to say that yesterday when it was unseasonably cool and very windy I gave him the day off. Yes. I am a chicken shit. Personally I call it self preservation. 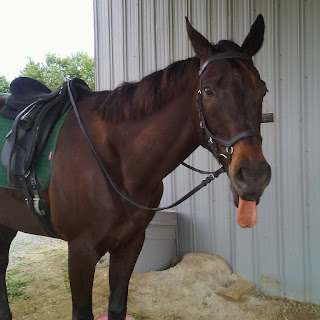 Sunday T, D and I are loading the ponies up and going to a show. They are riding tests and I am schooling without the pressure of riding a test or being on time for something. I probably need to drink a beer so I'm not the reason Curtis is tense.  😂  The plan is that Curtis will see his buddy Question acting calm and unworried and will copy his behavior so I can ride him a bit and go home feeling like maybe we can ride a test next month.