On Sunday, D, T and I all hauled back down to Carrie's for lessons. Or as Carrie calls it "formal dressage instruction". Waverly was in heat and during the trailer ride Curtis decided he was in love. But he actually did awesome unloading and settling in to his stall. Even with all Waverly's screaming for him I was able to get on and warm up without it looking like T was taking me to a leadline class.

Whether is the magnesium or the constant trips off my farm, this kid has made a total turn around and even if he looks at things or gets concerned he doesn't/hasn't blow up. Carrie says a lot of it is how I've been riding him. Whatever it is, I wanted to cry happy tears again after our lesson because of how well we did and how I "did the right thing" when he needed

Carrie could see that I had been doing my homework, riding with the whip to teach my hands to be quiet and riding the diamond at home (which is SO hard to do in my slanty arena). When we started trotting she made me hold the whip to quiet my hands but after a few minutes wanted me to use the whip on the shoulder as a whip/aid instead of hand-quieting tool. I was nervous about this because my person says that Curtis never liked the whip. I used it a bit behind my leg to make him march in the walk and on his shoulder to help control it.

Curtis is right handed. going to the left he pulls to the right. Taptap on the right shoulder. And to the right he falls in, especially at the canter.  taptap. At first I was hesitant to use the whip at all but once I had him moving forward and he was relaxed I started using it independent of Carrie's instruction, knowing when he needed a taptap and giving it to him.

One of the biggest things Carrie told me this week, which makes perfect sense, is to be the sursingle and sidereins. My body should be still and constant. If he comes up and pulls, stay constant, "do the right thing" and ride him forward into the bit. Don't move my hands, don't pull at his mouth. Ride forward and let him come back to me. When his right shoulder inevitably drifts off the line of travel, use that dressage whip at his shoulder taptap.

We worked on coming off the diamond into a circle. She said after the diamond, a circle should be easy, which so far for me it is not. I'm a bit worried about my 20m circles in my tests but I'll just keep doing this exercise. For example, if I'm riding the diamond to the right, at the top of the diamond instead of going to the next point, I make a 10m circle to the right and go back on the diamond. When we came off the diamond, he would pull and try to lift his head and I'd have to push him back into the bridle with my leg. When that right should fell out, taptap.


Then at the very end when we were working on our canter, Carrie's husband brought a stud colt into the arena to longline in the corner. The kid was a kite. All 4 feet in the air, screaming at Waverly who was also in the arena walking around waiting for their lesson, and screaming at the stud colt. And I was able to keep Curtis' attention. I was getting after him, taps on his shoulder, a kick, whistling at him or a "HEY! NO! PAY ATTENTION!" I never get after him when we are someplace new. I hardly get after him at T's and he thinks that is his 2nd home. But I was confidently getting after him and making him listen to me even though there was a lot going on, drawing his attention.

It was a fantastic lesson. And I gave him a big hug and told him he was amazing. Carrie is amazing. What 2 lessons with her have done for my confidence is amazing. I don't have any media yet. D hasn't sent it to me, she's a busy lady. But I was afraid if I waited too long to write it up I'd forget the main bullet points.

One more thing..... I rode in those Majyk Equip dressage boots and it was 90* and when I took them off his legs were cool and tight. And we were both soaking wet. He's also been on SmartTendon for 3 weeks and I really think that's helping keep his bad leg from carrying heat. Recommending both, just in case anyone needs ideas for post-tendon injury boots and supplements. 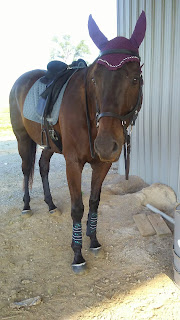