Somewhere before my last post, Curtis went to the track for the day to get his tendon checked. As of September, he had a 75% tear in the right front. This month has been 9 months  on stall rest and limited turn out and his tendon looks pretty awesome. But you never judge a book by its cover. 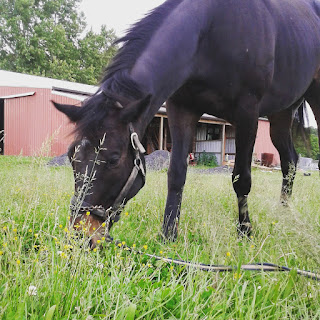 Curtis is going to need another 6 months. It's healing but the vet said after the ultrasound that he would not train him on that leg yet. And because 6 months means January, it will really be more like another 9 before we have him checked and hopefully back to work.

I have a bestie who worked for a trainer in PA that said you don't want to start those horses back in a deep track. Pavement or hard ground. Jogging forever. So probably my person will have to ride while I pony them down the road. Because in March ground is mush. Unlike right now which would be perfect....... 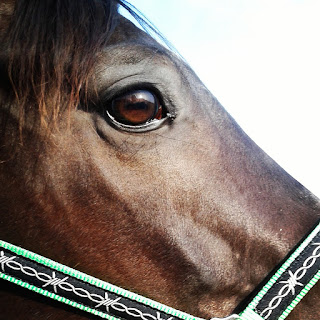 My person isn't even sure he wants to keep waiting for him and said maybe he should just give him to our neighbor and ex partner in the horse as a lawn ornament. But he also said when SJ gets to riding solo he wants Twister back and I can go horse shopping. Well we have a perfect horse for me sitting in the stall! I want him even if he can never jump. Which probably after another year he could do low stuff which is all my chicken ads will do anyways. And I can always jump on Twister because really, how much does my person actually ride?

I'd love to see Curtis make an epic come back. It was one year ago yesterday he won his 2nd at Indiana Grand. But I also want him as my new loyal steed.  And there is always a chance of losing him, if he was entered for a tag.

But whether or not I get him or he goes back to racing, it's still 9 more freaking months. Good things come to those who wait, right?
Posted by Sarah at 8:26 AM