Curtis has only had 1 day off since I got on him last Saturday. He's been great. Half the time I don't even lunge him anymore. We even led SJ around on him all over the property. Where he's never been ridden before. Past things that Twister is still spooking at.


But as mellow as he's been *knock on wood* he still has a lot of things to learn.
-stand still when I mount up
-Moving off my leg
-making circles that aren't a quarter mile in diameter
-paying attention and not worrying when your buddies who are also outside are not standing right on the fence  watching. 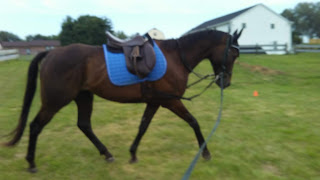 He does have fantastic brakes. And halts square. So the hard part is basically done right??

The last 2 nights because of the sore tootsies (farrier on Monday *fingers crosses*) I lunged him lightly with loose side reins to encourage stretching down and out. And then I got on him with a dressage whip and used it to help him stop being deaf to my leg. Today I added little bitty cones and taught him to turn around them. I try to keep my reins relaxed and use a lot of leg.

I was pretty proud of him when after only a few times around the cones he knew to turn around him. I could make him a barrel horse. Haha jk. After doing each cone alone, I used the cones like corners in an arena. He picked up on what the job was right away and for the first time stopped trying to cut the space in half.

This was all at the walk by the way. As soon as he has shoes we can do this at the trot and see if we can actually make some decent corners and learn to bend around my leg into them and and make some nice circles. And he's so happy to be back in work. 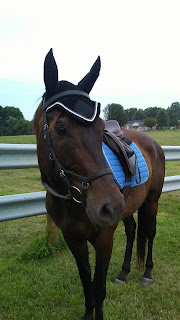