Twister and I went on our first hunter pace yesterday. We were invited along on the trip only 2 weeks ago and I've only been popping on him once a week or less. So I was hoping we could keep up. At home for the last 2 weeks I've been galloping and jumping in a mechanical hackamore and it was the only bridle in my box when we pulled out of the driveway yesterday.

It was about 50 mins away from us on a very nice farm. They have a fox hunting club there and start hunts next weekend. While my trailer can easily hold 3 horses, the back is still messed up from when we took Phil to his last race with us and the middle part that keeps the back doors locked just freaking fell off. We have butt bars and tied the back doors shut but I really didn't think it was a good idea to put other people's horses in there. Twister I put in the middle part so he was no where near the broken doors. He hates leaving his buddies and was a sweaty mess when I pulled him off an hour late.

Standing tied for 45 mins to the trailer, he was such a grown up. No hay. Just tied with a bungee and he just chilled out and watched all the other horses, no screaming or being ridiculous. Such a change from 3 years ago. Even after the ride when I left him tied with hay for close to 2 hours he looked bored. 3 years ago he would not have been so happy about being left alone, even with horses near by.


So anyways. We dressed up for the costume contest and we won 3rd. No one was going to let a bunch of adults beat an adorable little girl wearing a hula skirt on a pony. Silks are hot. Especially my lycra ones and I was soaking wet. Next year we pick a cooler theme if we dress up. Like margaritas in the Bahamas... 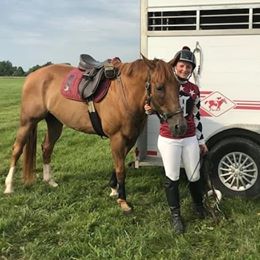 Twister was a total beast. He walked around the grounds all calm on a loose rein and when we trotted through those starting cones he put his head down and pulled. For a fat, out of shape, middle aged quarter horse, he sure acted like a 6 year old fresh off the track horse. There was a little muddy ditch that I had to force him to walk through because if I'd just given him his head he would have cleared it and probably slipped in the mud and fallen on his face. We were a non jumping team and my teammates didn't have any desire to jump but I wanted to use it as a xc school and pick and choose what we jumped. Some of the jumps were not that big and perfect for us, especially with our limited jumping the last couple years. Some looked small as you came up to them and you got 5 strides out and said um yea no and went around. A few times I re-jumped something because hell, we weren't making time anyways. He was a little looky. But mostly I was very hesitant and cautious and it held him back. When we'd come back through for a 2nd time and I got out of his way he was awesome. He's so much fun to jump if I get out of his way. 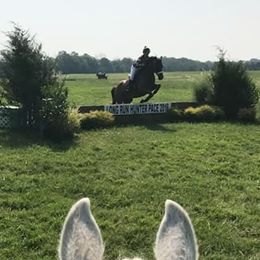 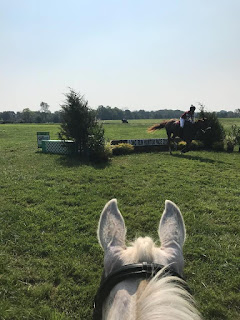 Quite a few times, especially up hills, Twister would put his head down and crow hop and take off. He wanted to race everyone and was basically a beast the whole entire time. I kind of wished I'd put something stronger in his mouth....maybe a 3 ring..... For as little as he's been worked this summer, once he was hosed off and had a drink, 10 mins grazing in the shade and he was back to normal. 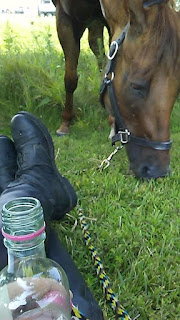 It was a 5 mile ride and optimal time for non-jumpers was 1:06 and we were like 1:30-ish so we were no where close. But we know for next year what optimal time is and can train for it. Because the winners loot is GOOD. Like fly sheets, saddle pads, gift certificates, large bottles of shampoo/ointment. If you win you basically make your money back in loot.  For 3rd for costume we got a medal, a little Kerrits zipper bag, a very nice hat which my person will probably steal from me, an Ariat hot/cold cup and a little bottle of horsie shampoo. 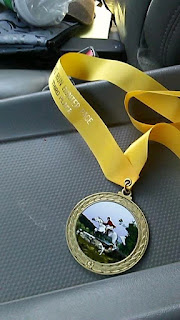 Just in passing on Fb while I was laying on the couch last night being exhausted, I saw that there is one at the Horse Park in a month which is also about an hour from here. I kinda wanna ask if they want to go to that one too. Because I had a great time and Twister really loved it. He's been jealous of all the time I've spent with Curtis this summer. As much as I love Curtis, Twister will always be my #1. 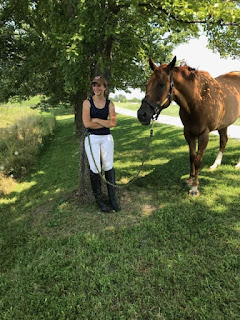 And omg, I've already washed these twice but they're still so dirty looking!!!! I don't care about what the boots cover but the rest?! But of course we were jockeys so I had to wear white breeches. Any tricks? Or should I just get them drycleaned???????
Posted by Sarah at 8:39 AM