What a Monday this had been

SJ and I were up early and took the trailer to have her NEW TIRES put on. Which my person said should take 20 mins but took them like an hour. I should have walked SJ over to the dollar store but whatevs.

So we get home and I a quick U-ie and go to throw Curtis on and the mother fucker would. not. load. My person saw me struggling and came down and couldn't get him on.
(backstory)
SO like 4 years ago when he was racing he was great in the trailer until one night he just wasn't. No no reason anyone could decide. Just didn't want to leave the track and it took my person and his racing partner hours to load him. If I remember correctly it didn't take him long to bounce back, and really, he didn't have much choice as he was being trailered somewhere every other week. And since I've been riding him, he has loaded awesome. Going on and off like a pro every time ad last Sunday loading up to go to Carrie's he literally, no exaggeration, drug me up the ramp. He couldn't wait to go places. Then Sunday afternoon when we dropped Waverly off I took him off for 30 mins and then he refused to load again and he had to spend the night. The next day it took a while but I got him up with grain. Today he wouldn't load for anything and got really hot and stupid. My person ended up having to blindfold him and back him up. 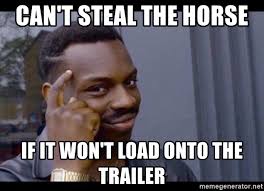 So after our ride a neighbor who is really great with horses helped me load him. She worked with him for a while. If he took his attention off the trailer she got after him and made him listen without getting him worked up and hot. I was really impressed. By the end of the hour or so we worked with him, you pointed and he went in. End of story. I'm not sure why his brain occasionally says fuck you to trailers, but it's not cool. But now I know how to deal with it in a positive and productive way. 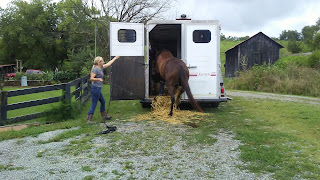 Our ride started out with me wanting to beat him or shoot him but after a while he settled in and focused his little adhd brain on me. Our canter took a little work but felt really awesome. And at the very end he stood in the middle of the arena chill as can be for another 30 mins which is absolutely unheard of, so as mad as I started the day at him, I ended our ride pretty happy. I'm going to bring him over Friday afternoon before the show to work with him again on the flat. My arena is terrible and slanty and now the guys are here fixing the pond so that should be fun. 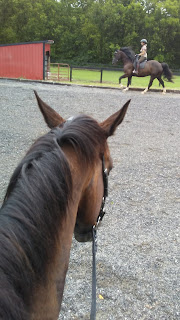 AND!!!!! I won the Riding Warehouse giveaway from last week so I have so fancy white show breeches coming to me and a new pair of paddock boots!!! So freaking excited!!!

As wild of a Monday as it's been, it's actually been pretty awesome.
Posted by Sarah at 7:18 PM