All my horses were jerks

So what did I do? Dragged his jerky ass back to the barn, slapped a saddle on him and made him Do Work. He was not happy about this. It was like going back in time a few months. He tried to rip the reins out of my hands, counter bend, rush, pull, throw his head. He did not want to work. I kept pushing him forward into my hands and tried to get him off his damn forehand. It was not easy. And I tried him over the trot poles and he'd rush through them like he was going to jump something. 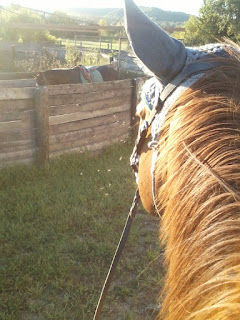 We did figure-8s and every time we changed direction he'd hollow out like "oh yep I'm done". NOT DONE LAZY PONY DO WORK. We did a little canter too, mostly so he could get it out of his system. Asking him to be round and lift while cantering was killing him. He wanted to rush around like a barrel horse. And every time we went to canter by the bounces that are still laying haphazard on the ground his ear pricked and he dragged and I had to tell him NO bounces. We don't do bounces until he is cantering on the flat like a gentleman. 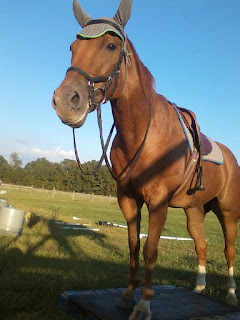 M has agreed to take a weekly lesson on Twister. Her horse is having issues and Twister needs to do some gymnastics and grids. So it's a win-win.

And then there was jerky baby Rascal who while I was trying to take photos of his jacked up left hind, spied the open gate and bolted and spent the next 10 minutes evading me. I should have lunged his ass for an hour after I caught him but at this point I was so tired and still had stalls and water to do. He'll get his though, just you wait.

Also this is the first time in my life I have ever donned gloves to use Furazone. But the yellow goo is helping!

And Curtis. Who while I was chasing Rascal around and thinking "wow all of my horses are jerks expect for Curtis" who then decided to be a jerk while I rinsed the mud off his legs. He knows better. He was spinning and stomping on the hose and being an ass.

It was an eventful evening to say the least!
Posted by Sarah at 11:45 AM