Last night I put the little lady to bed and I was soooooo tired because she's back to never sleeping (it's an on and off things...) but it was 70* and sunny and clear and beautiful. Because it's going to rain today I decided to take advantage and ride.

If I'd been smart I would have ridden the clean horse. But I don't have a western saddle that fits his large coffee table withers. So I spent nearly 30 minutes just getting the mud and hair off Twister. I've been getting so much hair off him and he's still so fuzzy! And he's been wormed. So I guess I just need to work harder.... 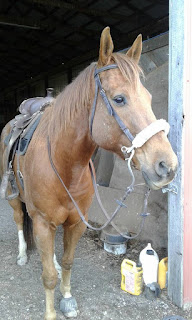 I thought I'd mostly walk-trot a bit, it's still a little soft in the yard, but he was being really light and moving off my leg as if I had spurs on. So we side passed and did transitions and then did a million simple changes. He was getting that right lead so easy. Normally it's a fight that takes a couple of tries. But he was right on the ball. 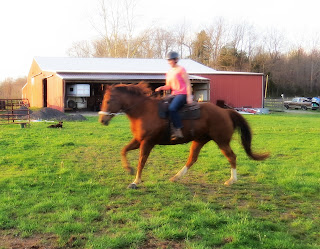 He was so much fun to ride. If I go out early afternoon I might get another ride in. So let's hope the weather and tiny human cooperate before the storms come later today.

Then he got a handful of oats and was allowed to graze in the front yard, which only really awesome ponies get to do after a ride. And then I turned him out and he rolled so hard in the mud and I'm mad at him because it will take forever to tack up again today. Jerkface. 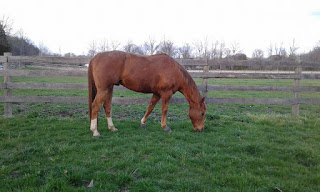