Scratched and No Regrets

It's so gross here. Not even 40. It snowed early this morning even. And it hasn't stopped raining. I emailed the show secretary yesterday and said if we scratched could SJ's entry just be moved to the show 3 weeks from now. They were amazing about it and said to check early next week as they would add her to the entries for the 11th! I'll have to reenter Curtis which is fine because in 3 weeks I might have decided to up my ride a test game.

Curtis  and I have been working very hard to keep our upward and downward transitions round. And the last few rides they have been amazing as well as semi-round and completely square halts. I was really looking forward to today because I thought we would ride a pretty great Intro A test if he could keep his racehorse brain under control.

In addition to doing some hill work to build his muscle back up, I've been asking him to be on the aids and collect his canter for a few strides at a time. I get half a circle or one pass down the long side and let him go then ask again. He's getting better but taking a lot of effort. The moment I sit deep, half halt and as him to come back to me he wants to break gait and I have to really push him to keep up with the canter. Probably I should have a lesson. I almost want to try Training Level 1 in 3 weeks, but we shall see. Might do Intro B and C. 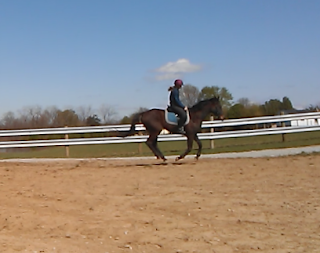 SJ is really bummed. I told her we couldn't go to the show because it rained too much and they closed it. But then was like HERE! COLOR EASTER EGGS! and she's been successfully distracted. I promised her after her birthday we would take her pony to a horse show.


And Rolex is next week already! We are planning on going to XC day! And the week after that is SJ's 3rd birthday and Derby day. So 3 weeks is going to fly by!!