Saturday a bunch of us went up to a friend's house to ride on her trails. It was freakin hot. So freakin hot. My person finally agreed to come with me and Rascal was awesome... except for he didn't like Callie, the cremello. He's racist I guess. Also Rascal wasn't fond of being toward the front. I think he felt like he was being chased. So we hung toward the back. Twister is losing fitness like crazy so he was happy to hang in the back and not be pressured to walk fast and do work. 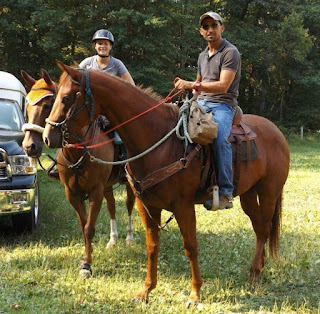 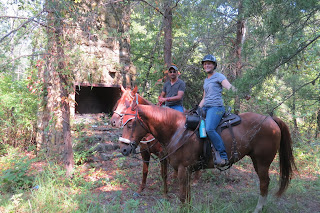 By the time we stopped for lunch (camp fire in them middle of the woods cooking braughts and hotdogs over it) I was so sick. I wanted to barf. I got [more] water in me and some food and some Sun Chips and finally started to feel better. The fetus does not like heat and humidity. I almost never feel sick until I'm out in the hot for more than 5 minutes. 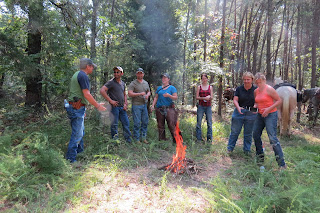 We rode up and down hills and mostly stuck to the woods after a unanimous decision to not be in the hot sun. It's been nearly 100* the last week. It rained today though so I'm hoping it starts to cool off. I can't deal with it. I wan't to be able to wear my boots and scarves to work again. 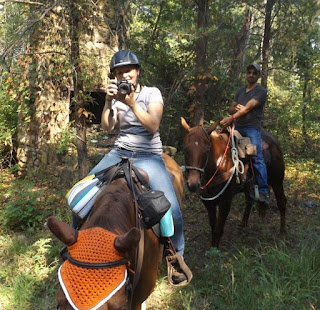 I rode western for the ride mostly because of the need to pack drinks and my camera. I really wanted to ride English to see how Twister did in D.M.'s saddle and also because I hardly fit in my Wranglers and still easily fit in my Kerrits. But alas.

I was really proud of Rascal who even had to stay in a strange barn alone when my person left early for work and the rest of us kept riding. He was the best one each way getting on the trailer. Which is redic that my seasoned been everywhere horse balked at the trailer a couple times when the 2 year old walked on and let me lock him in all by my self and I had to threaten to beat Twister before he knew I meant business. But it's all good. 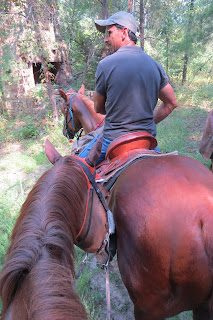 And the best thing is that Twister's old Easy Boots that don't fit him and fell off 20 times on Memorial Day FIT RASCAL!!!! He was loping in them and they still didn't come off!! YAY! And Twister's Gloves worked awesome too.