It's still too mushy to ride next to the barn which has left me  with the hill above it. It means Curtis has had to use his booty. It's also got him stretching more as he reaches up the hill. He's also learning to balance when we go down the hill. 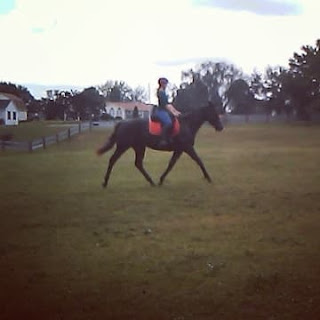 I've had to work about 5x as hard going to the left. I've thought about wearing a small plastic spur on just my left leg because he gets so stuck over there. By the end of every ride, today's ride especially, he was finally bending better to the left and stretching out as much left as he was right.

I've been spending a lot of time working on my position and using my body to regulate the speed and quality of the trot and have really pushed him in the walk. He is a fat lazy pony some times and I'm worried I'm making him immune to my leg aids by constantly using them. He really doesn't like crops and I don't want to rely on spurs. I try to give him a quick 1-2-3 kicks when he gets pokey instead of asking with every post. He's a lot like Twister where he does his best work with most impulsion after a warm up and canter but right now we can't canter. 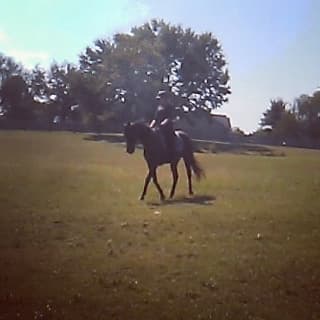 I've tried to introduce the free walk as well this weekend. I'm not sure what tests I'll sign up for (omg show in 5 weeks!!!) But I think maybe I should not do Training Level 1 because I'm not sure I'll have the time to work on our canter. He is halfway balanced to the right but to the left he is strung out and rushes and then there's the fact that we only get the left lead 2 out of 3 times and that's with daily cantering which we haven't done in 2 weeks. And so far are only picking it up those 2 times after a leg yield and some counter bending....... But the free walk will be in any test. So far it's just eh. But we've only done it a few days. I ask after he is on the aids and following my hands some. Then I transition to a walk and then push him into a free walk. 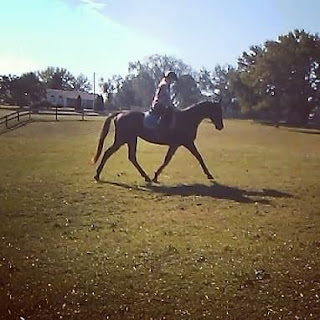 Curtis is very willing to learn. But we could really use another lesson but my trailer is kind of bogged in right now..... and my air compressor won't work. So even if I could get the trailer out, I wouldn't be able to even get it up the driveway.

In other riding new, SJ was ponied on Rascal this weekend for the first time. She's already a better rider than me. 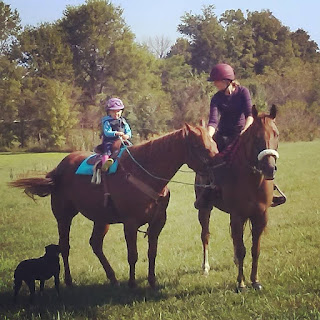