The Family that Rides Together

....stays together fights all the time. Because the other one can never do anything right and has no idea how to ride.

Went out early before the rain this afternoon to ride some ponies. SJ and Twister poked around. They look like an outrider team. She's fearless and he's such a good babysitter. 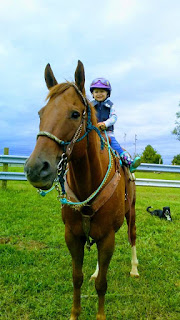 Curtis was great. Only dry enough at the top of the hill to walk-trot and barely even that. Then my person comes out and is trying to instruct me to ride in a chair seat and we started fighting. I'm like, I brought you out here to watch SJ ride. He's basically never allowed to tell me how to ride. He has no idea about dressage. My position must not be that terribly incorrect because when Curtis spooked at the dog (only thing he's scared of is wild dingos in the grass he can't see) I stayed on and got him moving out nicely again in like 5 seconds.

And he wouldn't take pics of vids because he said if I didn't ride like he wanted he wouldn't. GRRRR. If you take media for me, I can be the judge of how terribly I look or not. I'm supper bummed about the lack of media, too, because I could feel Curtis was starting to lift and stretch toward the end of the ride.

I get into such a chair seat 80% of the time that I find it very difficult to believe my leg was TOO FAR back as he claimed. But..... no freaking media. I wonder if I can get SJ to take a video for me.... she's not allowed screen time so she really had no idea how to use a phone lol so maybe not.....

My camera is getting fixed so I'll be able to record media from any fence post very soon.

I did get to work Curtis and make him focus while his best buddy was off without him doing his own thing. So that was a good experience for us. He was concerned but easy enough to make focus. 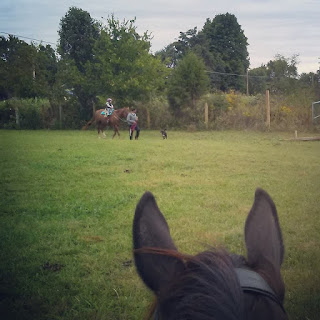