I'm writing this Wednesday morning, after riding late Tuesday because now I can remember the lesson because I just went over it with Curtis yesterday. 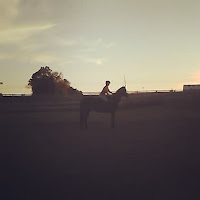 So Monday I bring the horses in and hook up the truck and trailer and head down the road. We pull in the driveway and my horse is acting like a complete idiot. There is a halflinger in the paddock along the driveway and they are screaming at each other and Curtis and stomping all over the trailer, rocking it back and forth. Seriously, horse.

I get him off the trailer and he's being an idiot. I put him in a stall to tack up, more idiot. Trying to fling the door open and take off and spinning in circles and squealing at the baby stallion like a little girl. So much fun. He acted like a rank 2 year old first time off the farm. I got him outside and walked him in the arena both ways until he was only looking at the horse next door, not every little single thing. I wish I'd taken a picture of him checking himself out in the arena mirror because that was too cute.

I didn't get on him until I saw his ears flick back to me on the mounting block, letting me know he even knew I was back there. And I walked him around a couple times and once the trainer came out and started asking us to do things at the walk, he settled right down to work.

First thing she had me do was tuck my pelvis under me and sit up straight over it. (I've been working on my core but holy crap I'm obviously not getting anywhere because I can't stay in this position) He was a little pokey and instead of nagging with my leg, she had me step down into my stirrups, left right left right. It made my hips shift a bit but more than that it got him to step it up a notch without all the constant bumping from my heels or legs.

Then she has me use my inside leg, stepped down into my heel and open my inside rein like a guiding rein toward my hip and do that both directions in small circles and figure 8s getting Curtis to accept contact and be properly round around my leg, not just at his neck. No surprise we had to do this a bit longer to the right to get him to drop his head and curve around my leg.


I told her first off about his old injury which really isn't that old, all things considered. She says he probably spent so much time to the left protecting his right leg that he's sore or stiff or even if he isn't now he thinks he might be so won't move the same way to the left as the right. My person said the same thing (he's doing this right now with his knee and back). It makes sense. I guess time mostly to see if we can work out of it. If not I'll have him adjusted.

So, once he was focusing and bending and accepting contact and being ridden easily off my legs, we picked up the trot. Typical thoroughbred, he rushes into all his upward transitions on the forehand and speeds right along at a choppy pace. He does this at home too, and after a few rounds I can get him back. But Monday (and Tuesday on my own) with reminders to sit up straight and sit over my pelvis and slooooowwwww my body I had him at a much smoother, even trot in 1 turn. We then did this over and over, both ways, asking him to speed up then slow down using only my body. He is quick about this and even at home last night after I almost came off and he was all freaking out at my asshole dog, I was able to use my body to bring him back to me.


We worked on making the circles round and even and then to the right she had me canter. Of course he rushed into it but also picked up the right lead and with a reminder that I was not eventing and to SIT UP we had a decent canter to the right.

And then to the left....... holy shit does this horse ever have my number. I know that's what it is. I know some of it is probably him thinking he needs to protect his left, but a lot of it (okay so like 98%) is that he knows he doesn't HAVE to. Well, guess again buddy.

It took forever. We tried from the trot. Asking when he was round, using a guiding rein to keep him left. I was told I need more weight in my left heel, look almost behind me to the left to throw my weight that way and bring that right heel back and KICK. Obviously, this wouldn't be the transition I use in a test. But to teach him that he does actually have to fucking pick up his fucking left lead..... only we did this 20 times using half the arena to keep us in a circle. I was hella exhausted We tried over a pole on the ground then an uneven pole from the right lead to try and get him to change it. But he'd just brake and trot. I know what I need to do to get it from a trot but at the moment it's not cutting it. He'd cross canter or get 1-2 strides and switch.

Last night. So ugly but we can work on that.


What ended up working the best, and it's what I did last night as well, was to let him get his right lead, then use that inside rein to keep him left into a smaller circle and KICK his ass into the left lead because then he has no where else to go. It worked. I got it Monday. I'd pull him back to a trot and do it again. And again. Then I let the reins out and gave him the whole arena to canter. I called it my victory lap. 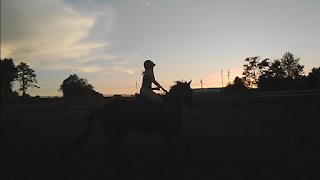 Last night it was almost dark out. The grass started to get damp and he doesn't have hind shoes. So today or tomorrow I'll know to ride him 1st then ride Twister. Because he started to lose his footing when I pulled him into the circle. I had my phone set up to record and I knew at the very end I got him to change but I wasn't sure in the middle that I did. Watching the video I saw that I got 1 change early. He was right, then cross cantered then I finally got him kicked over into his left. Then he spooked at Mona and I almost came off so the phone went back in my pocket just in case. But I KNOW I got him to change right at the end even without video proof.

Also, Monday I walked him down to the creek to cool off. I had to get off and walk him in then I got back on and we got in and he froze and backed back out. Next time someone is bringing another horse with us. Because this kid LOVES the hose. He just doesn't realize how fun a good splash is yet!

I really feel like I got so much out of my lesson Monday. I was able to use the instruction and tips from Monday to get him to do what I wanted on Tuesday. Instead of getting off after 20 mins of omg please pick up the left lead, I rode for about 30 mins total and got him to pick up his left lead and come back to me without being all over his face.


I really need to go back every week for a while. But with the tiny human and life, not going to happen. Even 5 mins away. But I'd like to take at least 2 more before our show in November. Not sure which I'll go to. I think the KDA schooling show because the MT and ride a test might be a damn zoo......
Posted by Sarah at 8:15 AM