First Show of the Year

Yesterday I went to a schooling show near Lexington. As a reference for a rant later in this post let me put some strong emphasis on the word schooling. Anyways.... braided and packed trailer the night before and woke up at the ass-crack of dawn to get on the road and still managed to have issues. #1 being that Twister was having a hard time getting on the trailer.... completely out of the blue weirdness. My horse GETS on trailers! #2 being that as we stopped to fill up with diesel I noticed that we had a low tied but then had to find quarters in order to put air in it.... and then there was the pee break because we all drank too much coffee.....

Anywho. We got to the show and I was LATE. Jump out of the truck, unload the horses, register, tack up and warm up in mock speed late. Out of the truck to Entering at A in less than 20 minutes..... All things considered, he did pretty good. He was a little short and tense but we had some really good moments. There was minimal spooking. As a matter of fact, all the looking stopped once we started our test. He got down to business. Except for the moment where he screamed back at Buster who was screaming for Twister.....

We were in 3rd after the dressage for the Beginner combined test and then we had to warm up for our jumping round. So they are setting up the jumps and the course is tight. 2 sets of 2 strides. For beginners? And they were SHORT 2 strides (here comes the rant....). And the 2ft course I'd been practicing for was actually more like 2'3'' and higher. And I know why. The college that I will not name was hosting the show and they wanted to use it for practice and jump all the big things. However, there were a few of us who wanted to use it as practice but have never jumped freaking verticals of any height at a show so wanted to start slow and low. So another rider/mom and I revolted. They were very pissy about it but we were like ummmm you didn't exactly set the course up to be beginner friendly AT ALL. Some very difficult turns and the 2 striders and and the first jump was definitely set at 2'6''. And they were a bit rude until the riding mom laid down the law. This was a SCHOOLING show. A warm up for everyone for the start of the show season. We all wanted to have good experiences. We're not prepping for a Grand Prix. Holy SHIT. But we got our way. Basically, they were too lazy to stretch the course out for beginners and rearrange it for the upper level girls who 90% of them were on the college's riding team (and were also pretty rude, especially in warm up where they were running people down. Not everyone wants to gallop around hap-hazardly jumping everything even though it means you could run someone down....). Oh and have they ever heard of fillers?!

Rant over. So we warmed up nicely over the actual 2" verticals and the x-rails. I wanted to jump 2' at a show. But more than anything I needed to boost my confidence by having a great ride in a no-pressure environment. We got that and did great. No chips. No poles down. We rode the course perfectly and finished in 3rd for the CT. 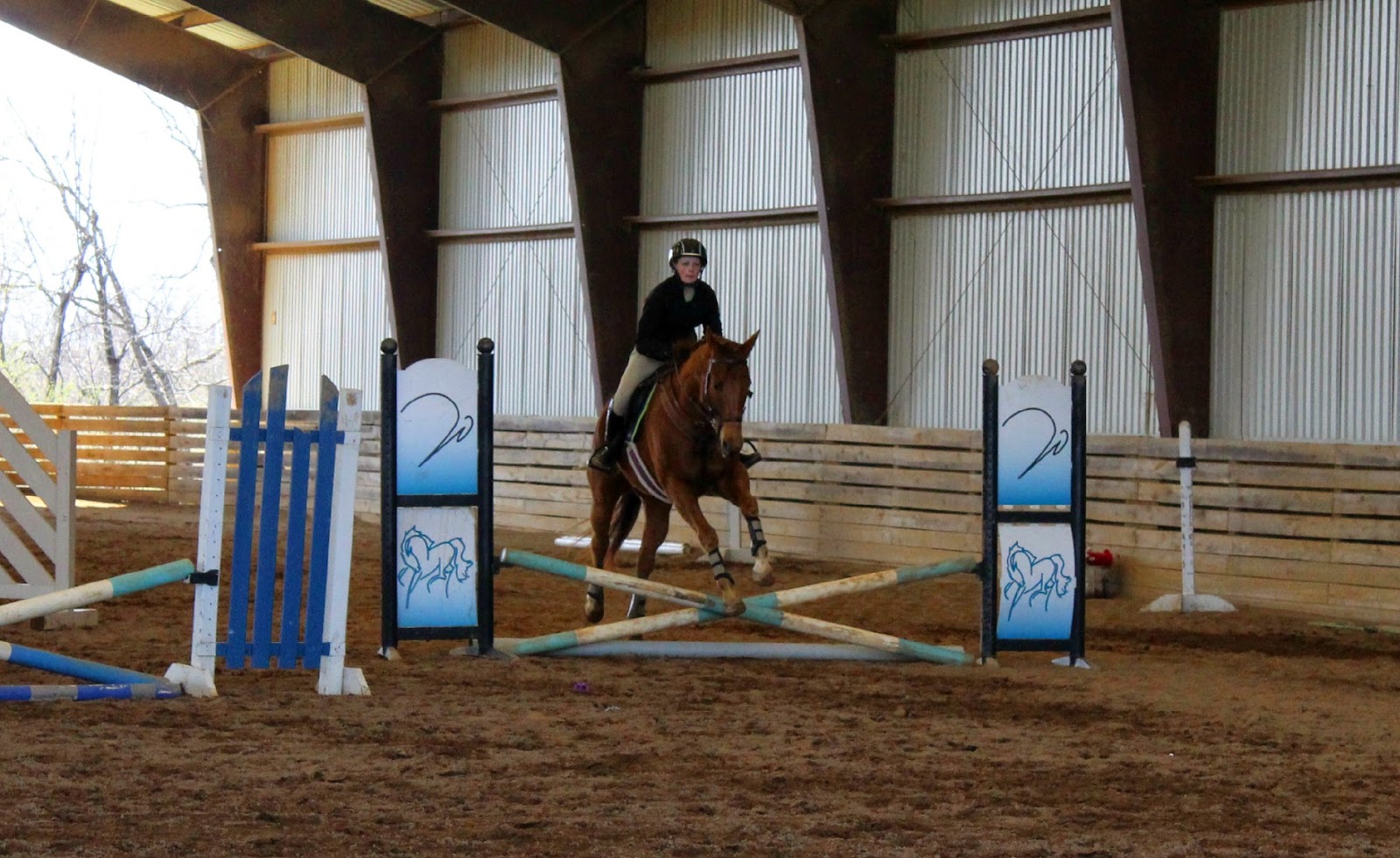 My friend brought her giant gelding and attempted to do Intro Test A with him. He was crow hopping and being silly so she scratched. But at least they tried and can work on it for this fall!

We signed up for an 18" jumper and 2' jumper and stood around waiting. Finally we got to go in for our 18" (x-rail) course and we cantered most of it. He was so awesome but I had to get after him a bit because he was getting worn out. It had been a long day. 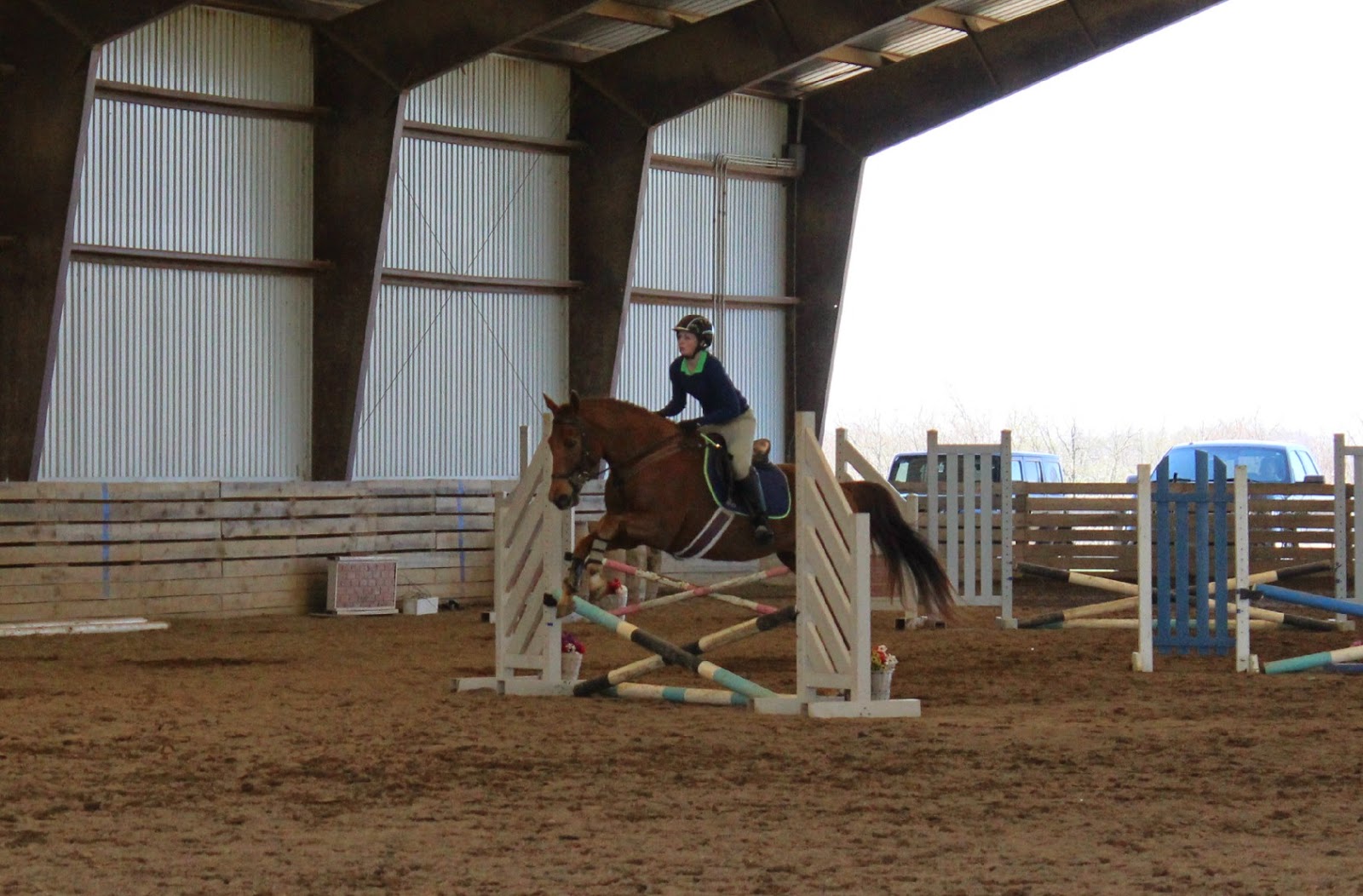 After the jump off (our first jump off, our first timed class!) I bowed out gracefully and scratched the 2' course. I know Twister would do it if I asked, but I could tell he was tired and fading fast. So I ended on a great note. Oh and did I mention Twister got his first blue??? And my first blue for a jumping class ever in my life! 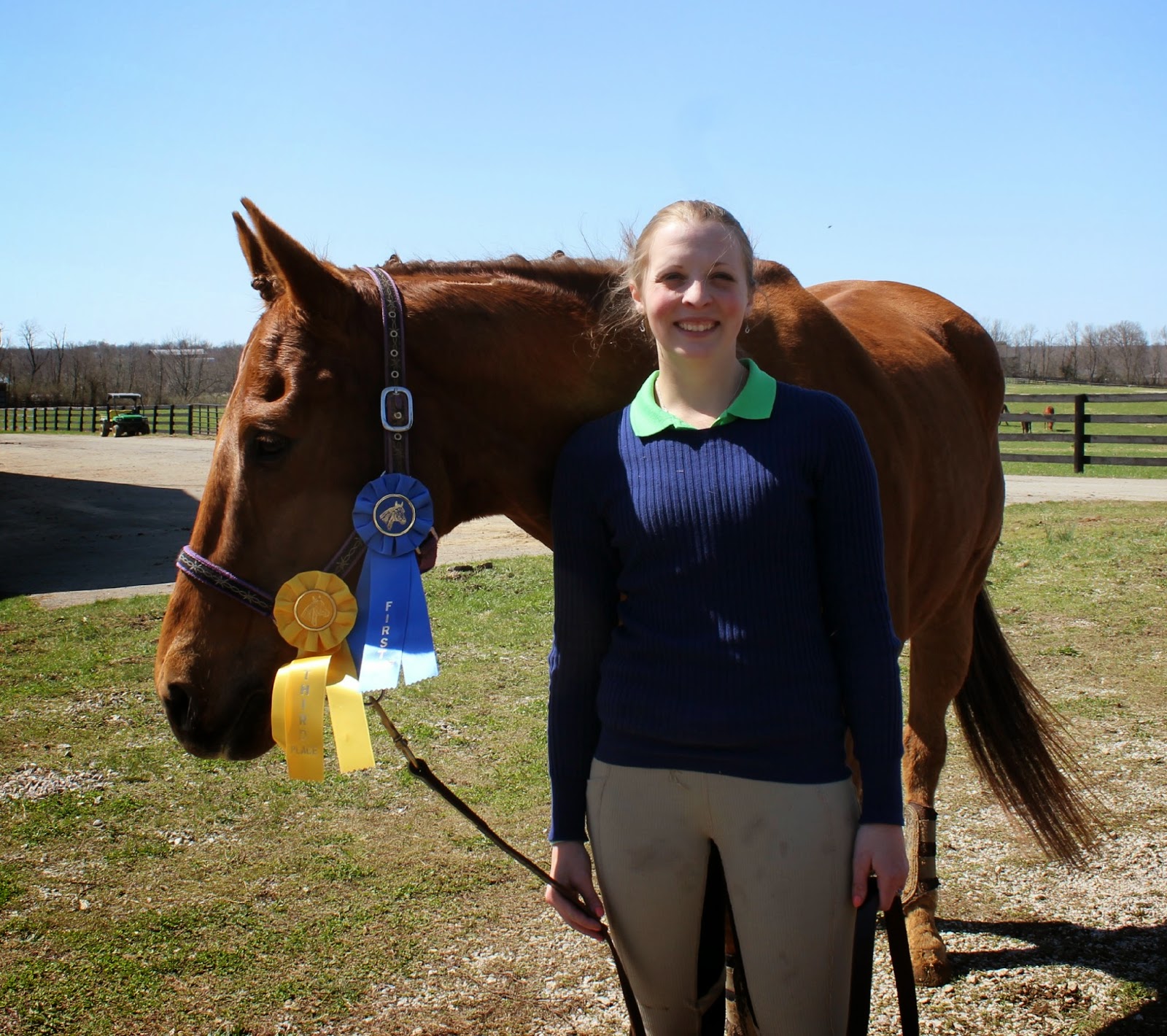 And then he wouldn't get in the trailer to go back home. (Backstory.... in Sept he rode a few miles down the road in a trailer that was a bit small. And I think it traumatized him. Though he rode to the clinic in a box stall trailer in Nov, I think being in a straight stall yesterday re-freaked him out.) It took an hour and I ended up having to beg some grain off the host barn. I have some work to do. I am going to give him a week off and then start riding again and start getting him comfy in a trailer again. I got worried about him. He shut down and froze every time we asked him to get in the trailer. I was so shocked. He's never not got on a trailer. Can't keep showing until this problem is resolved. Can't have my boy stressed out about trailering. But now he's home and happy and grazing. And there is plenty of mud outside should he want to roll and roll.
Posted by Sarah at 10:02 AM