Um so was I right about the 2nd day back being better?? Yup. After a week of not much jumping, he needs 2 days in a row to get his crap together.

And you know that moment when you're cantering to a jump and a drop of sweat falls off your brow and into your eyes and it stings and you ride to the jump with only one eye open?


I wanted to warm up with a nice forward trot but my legs were falling off keeping him moving. I had my stirrups really short so he was basically just blowing me off. I ended up dropping them one hole, giving him a good jab with my heels and a smack on the shoulder and said "move your ass!" It got better after that, and as usual he'll go in the big field and gallop all the livelongday.


He's still stiff to the right. I spend extra time there. He really needs to see the chiropractor but he'll have to wait a couple weeks until Ranger's surgery is all paid for. Obviously, looking at this photo, you can see he works out of it.

I worked on one jump at a time. First being the blue barrel. I made it a x-rail/roll-top type jump and the first 2 times over he did the hesitant looking and leaping thing. By the 3rd time over he was cantering strong to it and no longer looking at it. 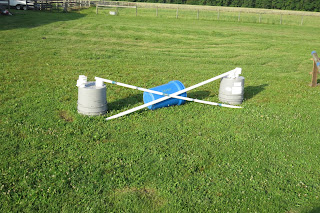 Then I worked on a small corner/oxer whatever you want to call it. I want Twister to jump everything and anything, poles going every which way and for him to not look ever. He was actually really good for this one. A little lazy the first time but leg leg leg and the next time was so much better. 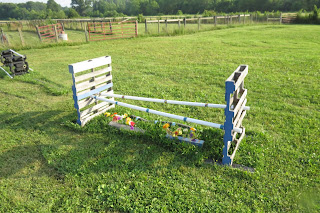 Then we worked on the block jump. I only asked him to do this one twice. He was starting to get really tired and it was really hot and humid out. I'd ride when it cools off but he needs to learn how to perform when it's hot because shows aren't always cool weather. The first time over he chipped but the pole stayed up. Which is great because I hate getting off to put jumps back up! The 2nd time he launched a bit but cleaned it with room to spare.

Last but not least we went in the back and galloped over my xc jump. I had planned to add a few poles to it and build it up, but my person took the truck to work. So it'll have to wait. I've been really trying to practice my crest release and balance. It would help a bit if I could keep my leg under me. I need to do something about that saddle to start. 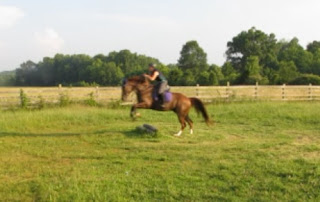 I brought a very sweaty pony back to the barn.