When we get a horse in to break in we usually don't waste any time. I didn't with Rascal either. Sunday I was walking him over big blue tarps and then rubbing the tarp all over his back and starting to lay it over him. We took time to learn that the lawn mower was not going to eat him.

He did not care one bit when I put my very light western saddle on him. He figured out how to follow Twister around the Eurosizer and accepted the bit like a pro. He is a very easy-going 2 year old. 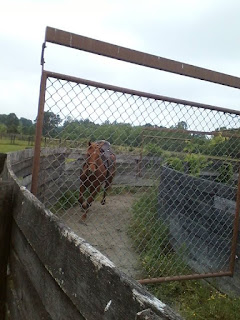 My biggest problem? Keeping him from walking all over me when he's trying to eat when we are actually supposed to be working! Seriously, kid!

Also, he is a little rude about personal space but after I got after him a little bit, he figured out that rubbing on me so hard I want to fall over is not okay and neither is dancing around like a Keibler Elf in an attempt to eat or find out where Twister is. 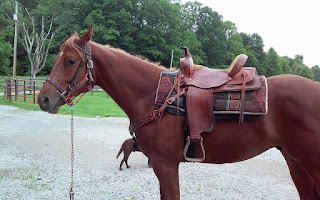 Yesterday I put my person's western saddle on him. This saddle fits him better and is a bit heavier but still pretty light as far as western saddles are concerned. I added the back girth and set him and Twister in the machine to jog. He didn't even care about the back girth. I had reins attached to his bit this time and looped them over the horn to help keep him from trying to weed eat while jogging. THAT pissed him off. How dare I try to starve him out! 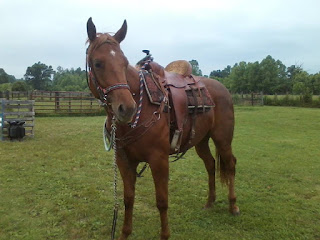 Driving him was a whole other ball game. But teaching a horse to drive without a second person to lead him the first little bit is always hard. Eventually he figured out that smacking him with both reins on his bum means GO FORWARD not BACK UP REALLY FAST AND SPIN IN CIRCLES. He has no mouth. But he's a baby who has had a bit in his mouth for 2 days. I didn't expect anything else. I really want to put Twister's dressage bit on him but I've been using that bit every day on Twister and moving it from one bridle to the other twice a day every day isn't going to happen....... 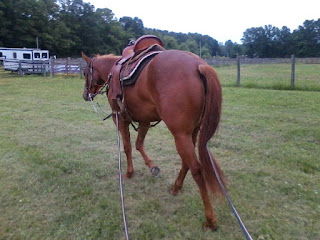 He's a smart kid. Once he figures something out he remembers it. Except for the no eating while working rule that is..... I think my person is going to back him tomorrow and I'll lead them around the barn or maybe even pony him off Twister. He won't be ready to ride solo.... he has no mouth. A week or two of ground driving before that happens.

Breaking babies is actually one of my favorite equine activities. Teaching them everything on the ground they need to know to make it in any discipline. Manners. Respect. What Not to Spook At. Mindset. It's when you figure out the most about their personalities.