Now, what we've really all been waiting for. We're all just here for the jumps!

Let me tell you this. We might be falling apart at home. We might struggle and I might let "bigger" jumps psych me out. But we get to a show and this kid never lets me down. He pulls out his big boy panties and makes me fall in love with him all over again. Twister's got game. And I cannot WAIT for the next show.


Our stadium that went with our dressage for the CT was a 2' course. We'd been jumping higher than that at home so I wasn't too worried. A couple things looked scary but I didn't think about it. 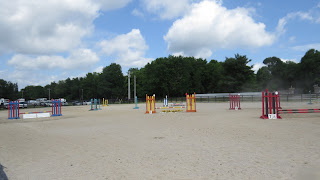 We warmed up lightly. I only popped him over the warm up jumps maybe 4 times total and made sure we had a nice, forward canter. Then we sat under a tree for 40 minutes and waited our turn.


Twister is not as fit as I need him to be yet. Especially if we're going xc in 5 weeks. So I liked being able to give him plenty of time to catch his breath and cool off. I wasn't worried about keeping his muscles warmed up. It was over 90. He was plenty warm.

I let the ring steward skip me a few times while I waited for my person to show up. He promised to come watch but he is slower than Christmas, being a typical guy. (And they say woman are slow?!). When I finally got in the ring I just breathed. I knew the course and had watched about 6 riders before me. I knew what to look for. I knew where to turn. Where to cut a corner, where to go wide. It wasn't timed at that level but I wanted to get the best ride. The course was not timed at this level.


D who I met at the clinic last month came to cheer me on too and took a video for all our viewing delight!


He was awesome. We looked and almost refused but we kept going. We jumped clear and we finished 4th for our division of "greenie"!!!!!!!!!!!!!! I did a pretty good job not getting too far ahead of him either which is my personal biggest problem. 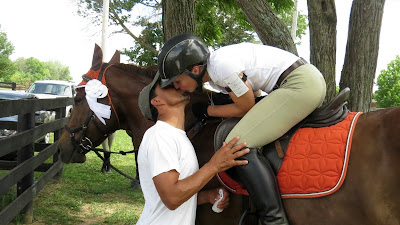 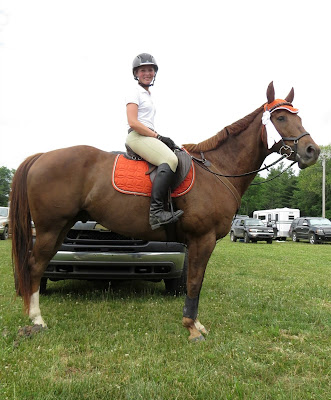 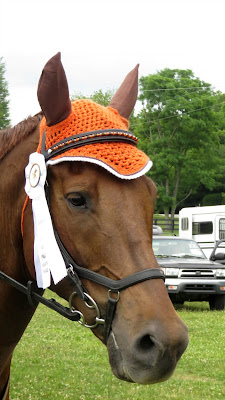 About 30 minutes later we had our 2'3" course extra jumper round. I was so nervous for this one. And I was afraid I might be running out of horse. But nope. We got in there and the bell rang and we trotted off to jump one. Landed and ended up cantering the whole course. I didn't even have to tell him "hey buddy if we want to keep the poles up you need to canter and power on" he just DID it. He had his 2nd wind and he was fabulous. Absolutely awesome. We missed our distance and jumped #5 funny again and this time I was like "oooohh SHHHH----- OOT!" and then was talking to him all the way over 6, which had me cut the corner around to 7 and we trotted, with tons of impulsion though, to #7. As we cam around to 8 I told him to PICK HIS HEAD UP and smacked him on the shoulder a couple times to make sure he was still cantering forward. He looked at the palms and tropical flowers but UP and over he went! I did the same thing as we came around to #9. I kissed, smacked him on the shoulder once and LEG LEG LEG and he jumped that fence better than any other either time around! Going around to #10 was easy peasy. The bigger the jumps, the better he got! What the hell have I been so worried about?!


I was just so freaking proud of him....and myself.... for completing that course. I was so nervous but we did awesome and I got the hugest confidence boost. I couldn't stop smiling (in between jumps and afterward). We jumped clear there too! It was supposed to be timed, but I don't think they ended up timing the extra round people because we didn't get entered in for ribbons, just extra rounds for practice and confidence-boosting.

Also, this venue was AWESOME. People were great. Everything was well organized. They had awesome food vendors. And the drive from my house was soooo easy. I will definitely be returning. And rumor has it, next year they might be hosting HTs!!!!!!