Memorial Day trail ride was yesterday. It's a yearly event although, this is only the 2nd time I've gone. The first year I was invited I had to work and couldn't get off. The 2nd year I went. The 3rd year Fatass was racing that day. So here again, I made it. Weather men need to be shanked. Seriously. Rain only in the am? Rain only in the evening? Yea, whatever. It rained all but an hour or so of the whole thing! Fort Knox opens up it's artillery area (where they practice blowing shit up and play war) once a year from 9-4 for 4 wheel trucks and horses. It's a nice long ride. In the rain. But, we're a die hard group and not one person suggested we wouldn't ride in the rain. 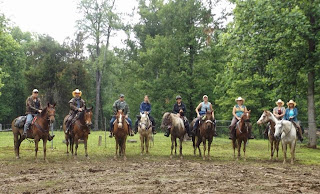 I got my Easy boots on and by the time I got to E's farm to meet up one had already come off. Even with all the mud, there are still rocks in the mud. I really didn't want a lame pony. Put the boot back on and continue. Had to get off the side of the road for a truck and it sucked off in the mud. We put it back on at the turn off and 4 seconds later is popped off again. I just kept going. Less rocks after the turn off and I though maybe Twister would be ok with all the mud. He took some bad steps as he found rocks but wasn't lame on it. I didn't even put it back on at the cemetery after we ate lunch. I waited until we got back to the turn off where it would get rocky again. I hopped off and we even tightened the wire and could barely get the latch down on the boots and 10 seconds down the trail... POP! So we continued on our flat tire. There was one spot where it got really rough and I got off and walked him. I got back on and rode a ways then as he started to get sore, I walked the rest of the way out and walked him back to my house even though after we got out it's a half mile of pavement and grass to home. 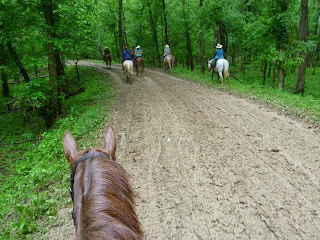 Also, T's mare freaked out on the way back to home base after the ride and Twister got a chance to show his skills as a ponyhorse! His favorite job ever in the whole world is hooking up to another horse and giving the other horse what for.

It took me an hour to wash the mud off him. And me. And my tack. But my new, and very comfy, saddle is synthetic and just hosed right off. My $100 flea market synthetic but leather-looking saddle! Loved it! It fits Twister AND! I didn't wanna cry from being saddle sore. Actually, today I'm not even that sore at all. Hurrah for western saddles that don't suck!


Extra grain and extra cookies and lots of kisses and a hot bath later, Twister is a tired but happy boy. I'll have to put lots of goo on his feet this week to help with any bruising but as long as I stick to flat work for the next week, he'll be good as gold. Obviously, he'll have today and tomorrow off. He earned it.