This will have to be a two-parter. Because, call me biased, but my horse is fucking awesome. The best. Class A man. Seriously. We might be falling apart at home but we go to a show and we are better than ever. Except for dressage which we excel in at home and suck at the show. But in general!

Dressage.... I got there with WAYYYY more than enough time to check in, dust Twister off, sit around and eat junk food, tack him up, change myself into my polo and boots and walk my stadium course. I had like 35 minutes after all of that to warm up for dressage.

He was doing fabulous. We had a huge field where we didn't have to play Frogger with the other riders and he was soft and moving out nicely and round. I warmed up for like 20 minutes and was like eh too hot for more, he's ready!

It was my turn and I told the judge my number and started doing some circles at A, waiting for the bell. He was biting at flies. Omg the flies were terrible. And I had just mixed up some of my potent fly spray too! He was covered in it to no avail. So we get in there. Halt at X half way decently and bow. Picked up our trot and went to C to track left. (Doing 2015 Intro test B, by the way).

Then holy shit. The rail was pinging death rays of sunlight at us and Twister decided to counter bend/spook at the rail the whole way to E where we were supposed to do our first circle. I got him paying attention a little bit more and did a semi-ok circle but he was still very concerned about the rail.

Our free walk, which has been awesome, sucked monkey nuts. He was biting at flies and he was concerned about the white and I was jabbing him with my spurs but he was in la-la land. Our medium walk was "sluggish".


Our circle to the right at B was much better and I was FINALLY starting to get him to LISTEN to me. We were even told "much better this direction". Well yea.... because it took him half the test to realize the rail would not eat him or blind him.

Our halt sucked again. He swings out and I was anticipating it but still didn't stop him. He was square in front though so whatevs.

We got a lot of "counter bending" comments. And I wanted to go back after reading my test and be like "excuse me, mrs judge but he wasn't counter bending. He was spooking." Just because a horse doesn't blow up doesn't mean it's not a spook.

The dressage arena was brand new and dust had yet to dull the bright white vinyl rail. Alas.

It wasn't ALL terrible and we did have a few nice moments. But better next time. And we'll have had a lesson by then too. And at least he didn't jump OUT of the ring. All in all not a terrible test. A lot better than the last CT. And we got a 34.something which my goal was to just score under 40! We're getting better. We just have a ways to go. And I remembered to smile! Not the whole time, but most of it!!!! I had some bling to help me with that from Beka Burke at StraightShotMetal. 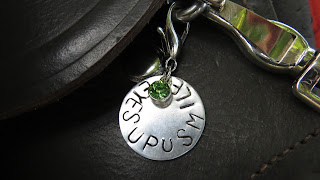 And here are a couple more photos to lol at....