Go to clinic/lesson Went to the clinic and vowed to go back at least every 4 to 6 weeks and take another lesson. It's needed. Nothing like someone sitting there picking and yelling at you about everything to improve your riding. No, seriously. Nothing like it! I have already scheduled my next lesson for after my next show so that I have a dressage test with comments in hand to base the lesson off of. 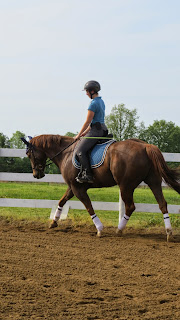 Grids/gymnastics have been working on this at least once a week if not more. Not only that, but I've been setting up 2 or 3 jumps in such a way that I can jump them multiple times in a "course" from different directions and angles with a bounce or 1 or 2 stride in there. It's hasn't been super but it's been pretty good. Never jump with bit clips by the way. I almost died that one time.......... My favorite exercise was the 3 poles set up as bounces and the one stride to the little jump. He just needs to learn to pick himself up and balance. Especially when he's getting tired. He get's so heavy! 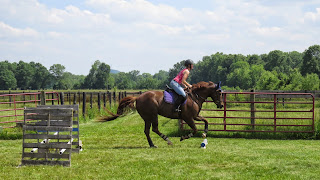 Lateral work This is on going. But we've done some. Maybe not enough. But some. And he is a thick-headed jerk that wants to cheat all the time and make life harder for me. We're still working on this. It's on going and going and going....... He is much better with metal spurs. I don't even have to actually use them. The threat is enough to remind him I actually DO have a leg.

School XC..... haven't made it out to S's farm yet to do this. I've galloped up to my little xc jumps but that's it. I'm hoping June finds me a little less busy. The truck needed new tires, which we just got last weekend so any unnecessary trailing had been put on hold. I could build up my xc jump some which would help, but I need to practice any and all elements. Especially ditches.

Hoof Update!
Twister's feet are not doing too terrible. His right hind is battling white line now. The left front still has some too but it's not nearly as bad. He's not lame or even sore on either foot unless we walk on rocks, which is nothing new anyways. My trims have hugely improved too, which is helping. Now if only I could find hoof boots I don't hate......
(I'll be spending a good deal of time working on Rascal's feet this month......... photos to come) 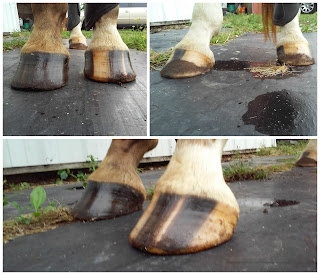 Increase Twister's (and my) fitness level. He's really not as fit as I think he is. I have started to bring him in while I'm at work to limit his grass intake. This will help with his soft tootsies and with his fatness. Also, I feel like after 3 months of consistent riding he should be able to jump more than a few times before getting sloppy. All comes back to fitness and getting his fatness out of the way. Trot sets and long slow gallops are now more regular.

Which runs into the next goal of taking more time when I ride. Normally I have so much to do after work that I tack up and ride and cool out in an hour. I should be riding longer, more flat work, more fitness building and not rush through our exercises so much.

Start increasing jump height. I have no desire to jump 4ft. But 2.6 or 2.9 would be nice. I know he has the potential. The other day we did 2'3" and he launched. But it was a very smooth, well coordinated launch that didn't unseat me at all. I KNOW he can jump higher. But I can't. It's not even so much mental anymore. The schooling show and falling off (ironically) were confidence boosters. But my legs still aren't stable enough and I'm still working on MY balance and timing. If Twister could do it without me it's be blue satin everywhere. Unfortunately his mommy has flopsy legs.

Finish breaking all my bad dressage habits, go to CT in June and score lower than a 40 in the dressage. Not really asking a lot, right? gah. Also, unlike last time where I scratched my higher jumper round, do the 2ft course AND my 2'3" extra round! No scratching!

Break the new horse in and make my person go riding with me!
Posted by Sarah at 10:12 AM