The Lightbulb Went On!

I wasn't going to post anything today but I have to brag about Twister really quick.

I tacked up this afternoon and put on my tall boots and metal prince of wales spurs instead of the plastic ones. And Twister was just so awesome! As I was getting him in front of my leg he was already starting to carry himself and I wasn't even touching his mouth yet.


When I asked for the trot he went right up into it and was moving out in front of my leg and we were on a 10 meter circles and we spiraled out into a 20meter and back down to a 10 all while all on the aids and being bendy and round. I wasn't jabbing him with the spurs. I let him know they were there but after that I just used my leg. He knew they were there and I'd use them if I had to. I did a canter depart and a few 20 meter circles on each lead and those were great and in control. Not round. But we actually managed to do a 20 meter circle which is a huge deal. He also never ripped the reins out of my hands or tried to drag me down.


Our half-passes were the best yet. Our downward transitions still are needing work and I didn't even work on the squareness today. And then we hacked out down the road with E and he was on the buckle the whole time. First time I've hacked out with the snaffle. Success! Twister is learning to be soft!!! But seriously, I was so fantastically happy with our ride today I had to brag. 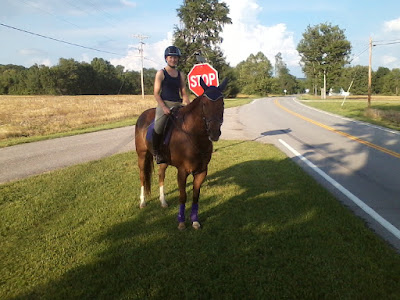