Pretty is as Pretty Does

Porkchop raced again last night. He's been training great. Has had some alternative therapies done to work out any kinks left from the poly track at Turfway and has been sparkled until he shined. And he feels and looks great but goes out there and can't get through a hole as big as Texas and finished second to last.... again?! Part is the jockey. This horse likes to be ridden. He doesn't mind a lot of rallying and hand riding and a few pops. Rev that horse up. But part is him. He won't switch his leads for anyone but my person. So he never gets his second wind to make a charge. He's freaking gorgeous, but gorgeous doesn't win races. I guess we are going to see if he wants to go long and probably on the grass too. Change things up because obviously what we're doing isn't working.


I'll tell ya though.... when he broke out of that gate, I wanted to throw up. I don't think I let my breath out until he cross the wire safely. I guess I'll be a little nervous from now on. I didn't even think that he might have gotten claimed. Just wanted him home safely. Be nice if he could break his maiden though too. Not much lower to drop him than the $10k he just ran. Not at Churchill anyways. And if you don't run there they take your stalls away. Not that there aren't like 3 whole barns worth of stalls open at the Spectrum... but they are stupid about stalls. 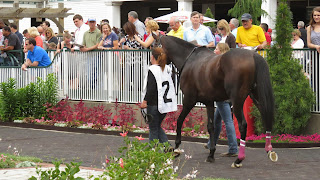 Anyways.... he's sound, happy and not even freaking tired. We'll run him back soon. Seriously he dragged us when we were cooling him out and took him back to the Spectrum and he was bouncing all over, being a colt-ish asshat. Good to know he didn't tax himself too much *eye roll*. Gah.