At the very last minute I decided to join D and T in having a lesson with Silke at T's farm. The focus was using cavalettis and improving the quality of a ride and each gate. 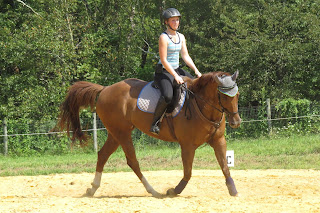 Twister was being his usual thick self. But I didn't ride him Friday so he was at least more forward and fresh than usual. I didn't even need spurs. I warmed up in a nice working trot and he was working on being round but I was promptly pulled up and told that I move my hands wayyyy too much and that I need to stop all the little tugs on his mouth because that's just annoying and tells him nothing. I was told if Silke got on Twister she could get him to what I couldn't just by being quiet. I said I'd love to see her ride my horse. 1- because I've never seen her ride except in photos and 2- I've always wanted to see a pro ride Twister. It was pretty impressive. She has legs of steel. And her hands are so quiet! She got him to collect and lengthen and everything in between. He has no idea what he'd gotten himself into! 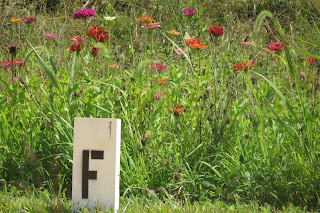 So finally I got back on and it was amazing. Because Silke didn't give in with her hands and shoulders every 5 minutes like me, Twister suddenly had an understanding that you stay on the aids until told otherwise. You do not get to release yourself. And oh by the way, you have to do work. It was still hard work, but a lot easier than it was. Instead of a heel in his ribs, I was just wiggling my legs to get his attention back to me and ask him to become round again.

She had set up 3 trot poles and also a canter pole and a bounce (you can see that set up in the photo above). The trot poles weren't too bad. We've been working on this a lot at home. 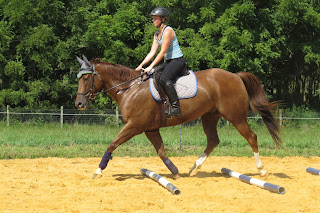 The single bounce was the single most difficult thing I have done in a lesson in ohhh so long! The turn to it was intentionally a bit tight.... so that you were forced to keep your horse balanced while at the same time trying to keep him from breaking stride. It was fucking hard! HARD. On our left lead we didn't have quite a hard time. But that's his more balanced and bendy side. But to the right, we broke right before the first pole every time. No matter how much leg! He would become unbalanced and break into the trot. They were itty bitty jumps. And this was just the exercise I needed. Not once did I grab mane. I'd be too afraid to grab mane in front of Silke. She'd yell at me! So I had to balance. But when Twister was balanced I COULD BALANCE. Go figure!!!!!!!!!!! 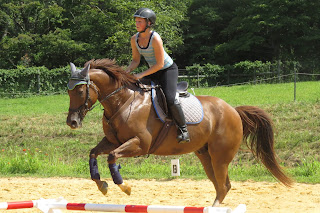 T's arena has really deep footing so that made it that much harder. And poor Twister was soooooooooo tired. But he kept working as much as I asked him.

I was much more steady and secure in the saddle when I didn't have to fight with 1200 lbs of giant QH. And it shows.

There is another lesson/clinic date in September but I'm not sure if I'll be going. And I am officially not showing again this year in any shape or form. More explanations on that later this week......

(Also these are just the pics from my camera M has tons more on hers so I'll have to post a photo update I'm sure later this week as well... like the ones of Silke on Twister!)
Posted by Sarah at 11:58 AM