Too tired to even WANT to ride?

Yes, it's true. By the time I get home from work and I know I still have stalls and to work with Curtis a bit I am just so tired. Riding seems like climbing a mountain. I should be taking every chance to ride now before I'm a whale. But when compared to going to bed at 9pm because I got all the other barn chores done early because I didn't  ride.... I'll take bed at 9.

Twister feels a bit neglected. I'd lunge him but he's such a dick to lunge and I don't have energy to fight with him. I could ride him up and down the road a bit each night but I won't lie, I've been really gun shy about that ever since I found out I was pregnant. People on my road drive like idiots and whereas I would normal put on my florescent safety vest and go, now... not so much.

Saturday I didn't do anything and Sunday my person and I rode together. I rode with him while he took Curtis for his first jog in 3 months. And rode again with him while he rode Rascal. This coming Saturday a bunch of us are headed to a friend's to ride on her trails and have a campfire cookout. I probably won't stay the whole ride, especially if my person rides too. He'll have to take off early for work. If he doesn't go I'll ride Rascal. Normally I wouldn't be riding him right now. But on closed trails with at least 5 other riders I think I'll be fine. It'd be a good experience for him. I hope both boys end up getting to go though. Twister loves a good trail ride. 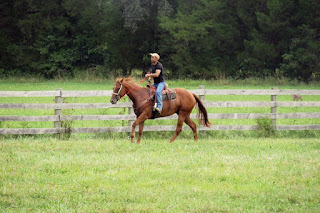 Back to Sunday.... I tried to put Twister through his paces but we were trotting out in the big field with Curtis or Rascal and he was counter-bending and trying to lean on the other horse and generally getting on my nerves. When I asked him to canter he didn't want to because he wasn't near a friend. And then when he did he was leaning on my leg and took me a good swift kick in the belly for him to stop. After that I'd just push with my inside leg and open my outside rein and he stopped lugging in and leaning.


I need to get back into regular work with him because he was going so nice. But I'm just so tired at the end of the day. And for the next week I have to lunge Curtis for 20 minutes a day in side reins because he has gotten fat and has lost his awesome top line. Maybe once he goes back to the track I can try a regular routine again.
Posted by Sarah at 12:47 PM