Flatting Can Be Fun

I decided to get off my ass and ride early today. And by early I mean like 10:30. But close enough. I used D's saddle and did lots of trot poles in varied stride lengths. I'm not riding as much as usual so when I do, gotta work on that topline!

I got on and was determined to not give in with my shoulders and hands. And he responded in kind, warming up nicely and moving in front of my leg. We have one corner where apparently every time we go through it he fights up stick his head out and has to counter bend. I think everyone has that one corner. I know it's going to happen and try to prepare as I come down to it on the long side. But it still takes 2 or 3 times of me circling in it to get him to stop being an ass there. 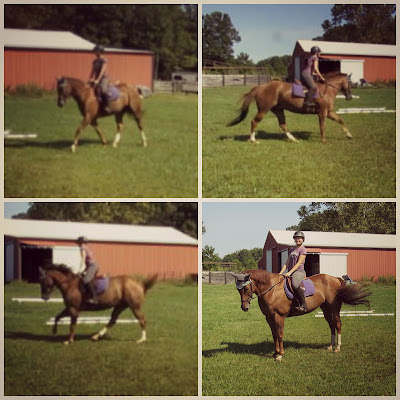 He does the trot poles great now. So now I think my next step is to vary the distance in a single line up. So he has to adjust.

And our canter is so nice now. I love our canter! And we had some really nice transitions. And a square halt. Yes, that's what I said! A square halt! Documented on camera! It's a boring flat video but he was moving so nice! I really enjoyed our ride. Maybe I can get used to this no jumping thing after all!