So yesterday I decided to jump again. But actually mostly, we worked on transitions. I put him in the small paddock and did walk-trot-trot-walk and then did the same thing at the canter on both leads. He has always been terrible about his right lead. I've had to counter flex him and push him into the right lead. Now he's so hot for that right lead signal that when I wiggle the left rein, getting him to think I'm going to counter flex him and at the same time put my left leg on him, he jumps right into the right lead. And this only took like 18 months for him to learn this..... bad rider? Or stubborn horse?

At first our transitions suck. And it seems like a fight. But the more we do the better they get. So it's something I have to make an effort to work on each and every time I ride. I get so much thinking about fitness and carrying ourselves I forget to do all the other fine detail things.

The My Virtual Eventing Coach Tips of the Day are like my favorite thing on Facebook. This one they posted the other day. When my mom saw my share and asked HOW you achieve that, I told her "you ride transitions. Lots of them" and the other day my person said I am on Twister's case with my leg too much. That I shouldn't constantly have to be pumping him and constantly asking him to move out. I should be able to get him at the speed needed and have him not need to be asked every 2 seconds to hold it. All I'm doing is desensitizing him to my leg to where he's learned to just ignore it. 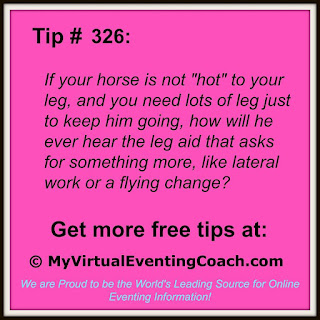 The more transitions we did, the more responsive he became. He's actually a little too hot for the canter transitions. He NEEDS to canter. And he anticipates big time.

Also, I have no seat. I suck at cantering without being in half seat. Badbadbadbadbad.

In August a friend is coming out to give me some jumping lessons. She used to be a hunter princess too. So we're going to work on my leg.

Twister gets a day off today. He's been very perky, despite the heat, so I don't want him to wear out. Also, riding + grazing muzzle = pony is finally starting to not be so fat!
Posted by Sarah at 10:40 AM