I was just going on about how we've kind of been eh. Not getting better. We need to step up our game. I'm so over dressage. Twister is too. If we could just do jumpers and hunter paces that'd be great.

Today I tried to do some jumping. But Twister was being lazy and not picking up his feet. And I was waiting too long instead of being too far ahead like I usually am. Basically we couldn't get our shit together. 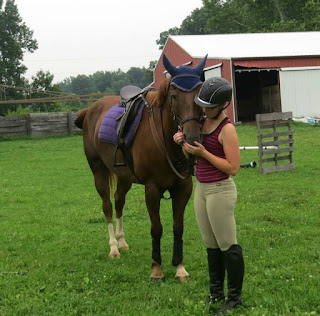 So I took him out into the big field to do figure-8s at the trot. I just wanted to work on a big forward trot. I'm constantly like legleglegLEGLEGLEG because he was so LAZYYYY. Finally we were moving out a bit better and he kept breaking into the canter. So I decided we'd work on our simple changes too.

And we had the best canter yet. It was collected and under control. And beastly. I was like where the hell did this canter come from and why the hell am I just now getting this?! I did simple changes on a figure-8 for a while and then decided to get the camera. He was getting tired by this time but I think I have a little footage to prove that actually happened.


I cleaned stalls and played with the dogs and built up my xc jump in the back field. Now it just needs to dry out a bit before we can give it a go! 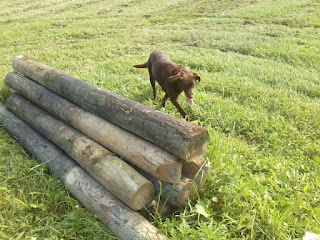