I GOT MY HORSE BACK!

This will be brief.

I GOT MY FUCKING HORSE BACK!!!

If you haven't been following, my horse has not wanted to horse and our 2 day break turned into a 2 week vacation or doing basically jackshit.

I rode today. Planned only on doing flat work but he was being so awesome (ok so he wanted to rip the reins out of my hands and speed around on the forehand like a train jumping the tracks) but even though he was a pisser I was SOOOOOO happy. It didn't take long to get some nice movement out of him even with him being fresh. Though as far as fresh goes he wasn't even half bad. Maturity? 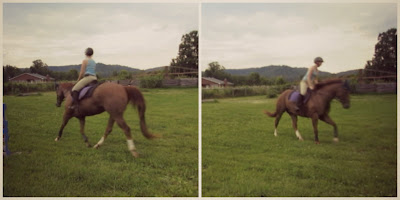 And because he was so awesome and even picked up his leads every single time, I let him jump. And I think he wants to learn the rollback.... must be the barrel-breeding in him.