If the weather would cooperate

Friday we had a tornado. Legit. Miniature tornado but a legit one. Hit about a quarter mile up the road from my house, on my road. And we had flash flood warning and a serious mud in the yard. Saturday it was hotter than Hades and rained on and off. Sunday was HOT but dry and helped dry out some of the paddocks. I even mowed a bit. Took Ranger for his first swim at M's house since the hay field next to my house is too tall to get to the pond there...... if it'd ever stop raining my neighbor could cut it......

I lunged Twister Sunday morning while Rascal jogged in the machine. Twister was fresh, even in the heat and humidity with all the bugs. He was rearing and bucking and playing and when I got him moving out around me I'd catch up to him and run across the field with him. Which he never wants to do, by the way. But we were joining up and having a blast, all the while he was bucking and playing around. Not to be an asshat like sometimes. But because he was feeling good. Good! I like when pony feels good! 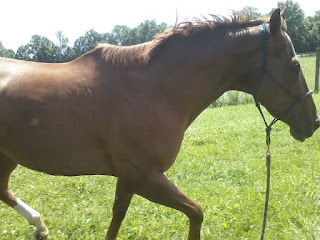 I decided I'd ride him that evening. I was going to ride down the road with E but before she met up with me, I tacked up and tried to make him work a little. It took some serious urging. He wanted to act like he was oh so sore and couldn't horse at all. But once I got him moving he felt pretty good. By the time we cantered, he didn't want to stop. I tried to trot over a little x-rail but it was terrible. So I think maybe his feet are still a bit tender. But as far as flat work we should be fine. I really need some Easy Boot Gloves. 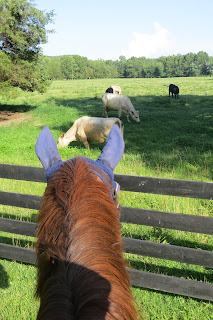 Going down the road he was great. He jogged a bit on the pavement and he didn't feel off or anything. He was lazy. But when it's 90-some degrees out it's expected. He never once complained about being on the road and wanting the grass instead. I am still seriously considering putting shoes on him. I really don't want to put nails in those hooves. And I really don't want someone coming in and cutting out all his sole and changing the shape of his hooves that I worked so fucking hard on. I need to get Gloves to ride in and just pick his feet and Farrier Barrier on the daily because.... it can't stay this wet forever.... right?????

And I was planning on riding again tonight but we are supposed to have some more nastyass weather. and planning on more tornado warning. Which means no riding. I'd leave work early, but seeing as I didn't even go Friday thanks to the weather and trees all over the place I probably should Do Work.
Posted by Sarah at 12:09 PM